Alaska has warmed by about 3 degrees Fahrenheit overall in the past 60 years, more than twice as rapidly as the rest of the country (Figure 1). Winter warming has, in turn, been twice as fast as the average warming in the state, with most of the change occurring since the mid-1970s. As a result, Alaska has been experiencing more extremely warm days (relative to its norm) and fewer extremely cold days. Winters are projected to continue warming at an accelerated pace. 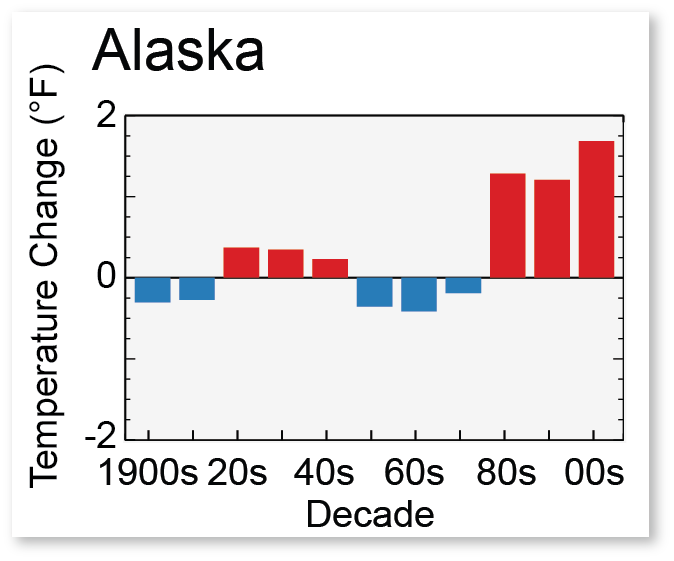 Many of the issues facing the Northwest also affect Alaska, such as an increase in large wildfires, insect outbreaks, and early snowmelt. In addition, as the country’s only Arctic region, Alaska has additional concerns, including reduced sea ice, widespread glacier retreat, and warmer permafrost.

Precipitation in Alaska has been relatively stable (Figure 2), but it is projected to increase by 15 to 30 percent, especially in northwestern Alaska, by later in the century. Increases are projected for all seasons, but water availability is expected to reduce water availability during the growing season because of the higher evaporation rates that come with higher temperatures. 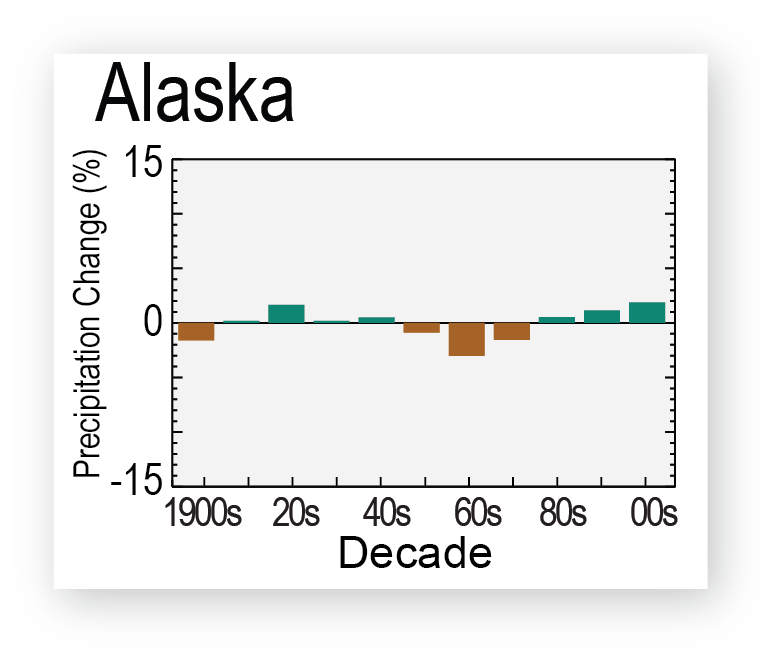 The growing season has already expanded by about 45 percent over the last century. This trend has led to more insect outbreaks and greater wildfire hazard, and this trend is expected to continue. The hemlock woody adelgid, which has killed many eastern hemlocks in recent years, is expected to continue expanding its range and destructive potential.

A recent increase in warm, dry summers with electrical storms has led to more large fires during the past decade than during any other decade since record-keeping began in the 1940s. The amount of area burned every year in wildfires is expected to double by mid-century and triple by the end of the century. With the increase in fires and warmer temperatures, spruce forests could start converting to broadleaf forests for the first time in at least 4,000 years. Wildfires can improve habitat for moose, berries and mushrooms, but reduce winter habitat for caribou. Lichens, a key food source for caribou, typically take 50 to 100 years to recover after wildfire.

Invasive plant species are also more likely to establish in boreal forests in south-central Alaska, including in the Kenai Peninsula. Invasive species costs in the U.S. as a whole are estimated at $120 billion a year. Some exotic plant species have traveled along roadsides into floodplains along rivers and recently burned forests. Some of these species are toxic to moose.

About 80 percent of land in Alaska sits on permafrost, which is frozen ground below the surface that influences water balance and what lives on top. More than 70 percent of existing permafrost is subject to thawing, which vastly increases the potential for soil erosion, especially in coastal regions subject to stronger storms and facing an ongoing trend of having less protection from ice as the boundary shifts north. Already the interior and southern Alaska have seen permafrost thawing, which has forced some villages to relocate. As permafrost declines, tree growth is expanding into these formerly frozen regions.

The decline of permafrost also means the reduction of Alaska’s ability to store some of the carbon that had been removed from the air as carbon dioxide in previous centuries. Alaskan tundra is typically composed of peat made from incompletely decayed organic matter from plants over past millennia. The drylands of peatlands can allow these vast carbon stores to burn, thus allowing the carbon to recombine with oxygen to form carbon dioxide once again. A single large tundra fire in 2007 released as much carbon into the atmosphere as had been absorbed by the entire Arctic tundra over the past 25 years. This spurs on the ongoing climate change further, in a feedback cycle that may be irreversible at the scale of human generations.

For more insights on how climate change is affecting and is projected to affect Alaska, go here http://nca2014.globalchange.gov/report/regions/alaska].