Like many species, frogs, snakes and other amphibians and reptiles face an uncertain future as the climate changes. Amphibians have recently been documented to be experiencing global population declines (Stuart et al. 2004), and similar signs of decline may be emerging for snakes (Reading et al. 2010) and other reptiles (Gibbons et al. 2000). 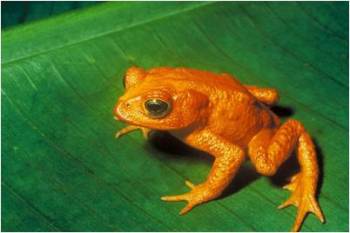 For amphibians and reptiles, responses to climate change will be influenced by the following primary factors:

On an annual basis, the interaction of these factors will determine reproductive success rates and survival. Over the long term, the frequency and duration of extreme temperature and precipitation events will likely influence the persistence and dispersal of local and regional populations. Synergism among a variety of environmental stressors can adversely affect native amphibians and reptiles, with climatic change likely to exacerbate the situation.

As with other species, montane and higher-latitude populations of amphibians and reptiles are most at risk from climate change because appropriate habitat is likely to shrink or, in some cases, disappear (Root et al. 2003). Amphibian and reptile populations respond strongly to changes and variability in air and water temperature, precipitation, and the length of time and seasonality of water presence (hydroperiod) of their environments (Cary and Alexander 2003). This is partly because they are ectothermic; their body temperatures and thus activity cycles are dependent on local temperature and environmental conditions.

Reptiles are somewhat more mobile than amphibians and have a greater ability to withstand the expected warmer conditions, including hotter droughts (Pough et al. 2001). However, because key habitats and species ranges have already been altered and fragmented by human use and development, the physical pathways to connect animals with suitable habitats (upwards in latitude or elevation) may not exist. Although some near-term benefits to climate warming may be seen for some reptile species owing to increases in preferred temperatures and activity periods (Chamaillé-Jammes et al. 2006), over the long term, expected variability and temperature extremes will likely not be beneficial to these taxa. 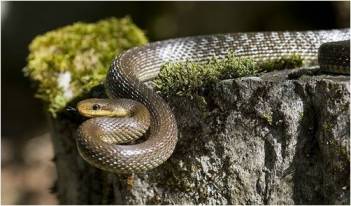 Figure 2. A population of Aesculapian snakes, or rat snakes (Zamenis longissimus), in France were among the 17 populations considered by Reading and colleagues (2010) in their study of snake declines in Europe, Nigeria, and Australia. Source: Felix Reinmann, Wikimedia Commons.

For example, if temperature were the only important factor, the species richness of reptiles should increase in cooler regions, such as the northern United States (Currie 2001). Yet, Reading and others (2010) documented declines in 11 of 17 snake populations examined in the United Kingdom, France, Italy, Nigeria, and Australia, including some populations in protected areas. Species with small home ranges, sedentary habits, and ambush foraging strategies tended to be more susceptible to decline than wide-ranging, active foragers (Reading et al. 2010).

Temperatures outside of their thermal optima can cause physiological stresses in reptiles. Some reptile species exhibit temperature-dependent sex determination during egg incubation that could be influenced by changes and variability in global climates (Gibbons et al. 2000, Hawkes et al. 2007). Increases in frequency or intensity of wildfires may directly affect animals during the fire event or degrade habitat conditions necessary for their survival.

Because of their affinities to aquatic habitats and their small size, amphibians typically have relatively small home ranges and low dispersal rates, although there are some exceptions (Deullman and Trueb 1986, Wells 2007). Amphibians appear to be declining in many locations, and the decline has, in some cases, been linked to diseases related to climate change (Pounds et al. 2006). For instance, the authors found that the Monteverde harlequin frog (Atelopus spp.) vanished from the cloud forests of Costa Rica, while about two-thirds of the 110 or so species of this frog endemic to the American tropics met a similar fate. Pounds and colleagues (2006) concluded with “very high confidence” that the epidemic of a pathogenic chytrid fungus (Batrachochytrium dendrobatidis) that was killing the frogs was linked to large-scale climate change.

For amphibians and reptiles, the timing of key ecological events is influenced by environmental conditions, such as air and water temperature and precipitation patterns. The timing of breeding/egg laying, metamorphosis, dispersal, and migration may shift in response to higher temperatures and changes in rainfall (Beebee 1995). If such shifts in amphibian and reptile activities occur inconsistently with other ecological events (such as the emergence of their prey), growth and survival rates would be affected.

Recent research on amphibian declines has documented the role of emerging pathogens and, in some cases, epidemic outbreaks of particular infections and diseases (Daszak et al. 2003). Changes in climatic regimes are likely to increase pathogen virulence and amphibian and reptile susceptibility to pathogens. Similarly, warm water invasive species (e.g., bullfrogs and some fishes in the western United States) are a concern to native species and may expand their ranges given warming trends.

Management efforts to counteract projected declines could involve reducing the effects of other factors that have negative influences on amphibians and reptiles — such as habitat alteration, pollutants, and toxins — to decrease stresses on individuals and populations. In addition, managers can consider planning and expanding nature reserves so that species at risk can disperse into more suitable environments.

Next: Amphibian and Reptile Diversity: Research >>

Related to Amphibians and Reptiles: