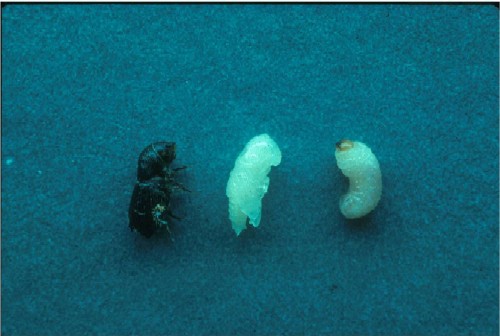 Pines attacked by bark beetles tend to turn pale green, then yellow, and, finally, reddish-brown (DeGomez and Young 2009). Likewise, some species in the Cupressaceae family, such as junipers (Juniperus spp.) and cypress (Cupressus spp.), have branch tips break off and hang like flags and turn brown, and then the whole tree may turn brown (Schalau 2003). Under the bark of a fading or dead tree or log, you can find tunnels or galleries, often with radiating arms, where eggs, larvae, pupae, and emerging adults live or once lived. The white larvae and brown to black adults are about the size of a grain of rice (Figure 1). Small piles of sawdust indicate fresh bark beetle activity on freshly cut trees. Depending slightly on the geographic location, fresh green logs will maintain enough moisture between April and September for beetle colonization for three to six months. The wood from which the bark beetles have emerged will have BB-size holes (1/32″ to 1/16” or 1 to 2 mm) in the bark where the beetles have chewed through to exit.

In recent years, western North America has seen large stands of trees killed by native bark beetles. It is generally thought that the defense mechanisms of these trees were weakened due to drought and overcrowded forest conditions. Warm temperatures also contributed to this outbreak. If global temperatures continue to rise, forest entomologists are expecting bark beetle outbreaks to expand geographically and into species of trees that in the past have not had large outbreaks.