Climate change poses a significant threat to biological diversity in forests. Learn the major changes that are expected.

Global and regional climate models project climate warming, with projected increases in average temperatures as well as higher minimum and maximum temperatures. Projections for regional changes in precipitation include changes in amount, timing, intensity, and form (rain vs. snow). Warmer air holds more moisture, so rising temperatures increase the risk of drought from higher evaporation rates even as high temperatures increase the likelihood of extreme precipitation events that can lead to floods (Trenberth et al. 2007). In addition, projected increases in nitrogen and carbon dioxide (CO2) will have different effects on different species.

Climate change will have the greatest proportional effects on biodiversity in biomes with extreme climates. In other words, the changes expected – increases in temperature, nitrogen, and atmospheric CO2 along with changes in precipitation – are likely to have the greatest proportional effects in areas where these elements are most limiting (Sala et al. 2000). Higher latitudes and elevations are where these primary effects are expected to be most marked (Currie 2001, Root et al. 2003, Hampe and Petit 2005). Secondary effects of biotic exchange – defined as the deliberate or accidental introduction of plants and animals to an ecosystem – are likely to affect many areas, particularly those that have lower diversity and higher isolation, such as the Mediterranean and grassland ecosystems (Fig. 1, Sala et al. 2000). 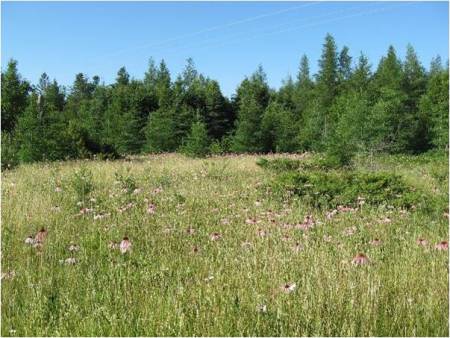 Figure 1. Grasslands are among the many ecosystems threatened by climate change. The introduction of invasive plants that are better adapted to warmer conditions could outcompete native vegetation. Above is a purple coneflower preserve in the Hiawatha National Forest in Michigan. Source: Sara Huebner, USDA Forest Service

The most significant effects of climate change on species richness in the conterminous United States are expected to be in response to increases in summer temperatures (Currie 2001). Theoretically, ecological communities could move up in elevation and latitude (Walther et al. 2002), however, successful migrations will depend on the rate of climate change relative to essential habitat needs and key community interactions. More likely to happen is existing communities will become decoupled, with some species able to track favorable climate envelopes, while others will lag behind (Midgley et al. 2002). Species most at risk of climate change are those with small geographic ranges (e.g., local endemics), narrow physiological tolerances, limited dispersal abilities, highly specific habitat associations, strong interspecific dependencies, and low genetic diversity, as well as those that have recently experienced population declines (Midgley et al. 2002). 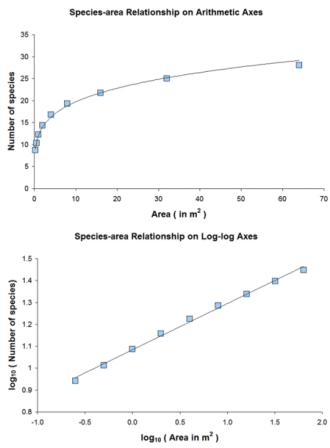 Figure 2. The species-area curve estimates the number of species that can occupy a given area of habitat. It is usually constructed for a single type of organism, such as vascular plants or small rodents. Source: Adam B. Smith. http://en.wikipedia.org/wiki/File:SAR%28Species-area_curve%29.gif

The likely result will be the extinction of many species, reduced biological diversity, and changes in the composition of remaining communities. The coming temperature increases are expected to leave 18 to 35 percent of all species “committed to extinction” by 2050. Thomas and colleagues (2004) calculated this range by matching projections for shrinking habitat (using three different climate change scenarios) with expected species diversity based on the species-area curve. This well-established curve (Fig. 2) finds that the number of species declines as area decreases, with area in this case being area of suitable habitat based on existing species distribution.

Resulting communities are expected to contain species that are able to profit by altered climatic conditions (i.e., species that invade original communities and species that can tolerate energetic limits imposed by climatic conditions) (Currie 2001). Mediterranean and grassland ecosystems are expected to be particularly vulnerable to invasives because of their moderate diversity and relative ecological isolation, whereas northern temperate forests have relatively low vulnerability to invasives (Sala et al. 2000). Reductions in biological diversity in existing communities are likely to diminish the ecosystem services and resilience of those communities to environmental stressors by reducing their functional redundancy (Kremen 2005, Loreau et al. 2001, Reich et al. 2004).

Major uncertainties remain regarding the fate of biological diversity and what options exist for adaptation and mitigation (Thomas et al. 2004). Species extinctions are expected to lag behind climate changes, particularly in longer-lived species. The composite effects of climate change and land use change are unknown, and at worst could be multiplicative. It is also difficult to predict the competitive and adaptive abilities of species in areas with no current ecological analog. Finally, effects on the genetic diversity and adaptability of species are likely to be significant (Hampe and Petit 2005) but are largely unknown (Parmesan and Yohe 2003).

Next: Managing for Biodiversity Loss from Climate Change >>

For more on Biodiversity and Climate Change:

Related to Biodiversity and Climate: