Small-diameter trees historically have been used for the manufacture of paper, particleboard, fiberboard, and other reconstituted products. However, because of the shutdown of many paper mills, the demand for these trees has been reduced dramatically. In areas where the demand for pulpwood has declined, frequent opportunities exist to use small-diameter woody trees and occasionally shrubs for bioenergy. 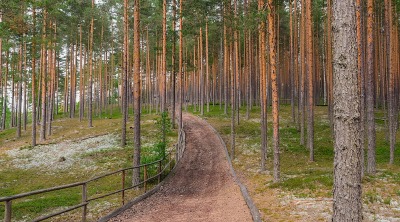 Thinning can be especially important for small-diameter woody trees, like the ones in this Scots pine forest in Estonia. Photo: Ruta Badina, Wikimedia Commons (CC BY-SA 3.0)

Thinning is the silvicultural practice of reducing tree numbers in a stand to favor the growth and health of the remaining trees. A stand might be thinned several times during a rotation in the case of even-aged management or each time a compartment is entered for harvesting operations in stands managed through uneven-aged techniques. Thinning of sprouts is often applied for coppicing species to favor one to three sprouts per stump. Although foresters recognize different types of thinning, the most common silvicultural practice for conifer stands is the removal of the smaller, weaker, and most deformed trees; this is known as thinning from below or low thinning (Schultz 1997; Smith and others 1997).

Thinning for bioenergy is possible where the thinned trees cannot be sold to higher-value markets. Traditionally, the least valuable roundwood product is pulpwood. Depending on energy prices and the supply and demand for pulpwood, a bioenergy market may compete directly with the pulpwood market or new opportunities for production thinning may be created where a pulpwood market does not exist. Furthermore, because the bioenergy market has lower quality constraints than the pulpwood market and biomass can incorporate some crown material, the bioenergy market may facilitate commercial utilization of trees that traditionally have been precommercially thinned and left on site as unutilized residue. 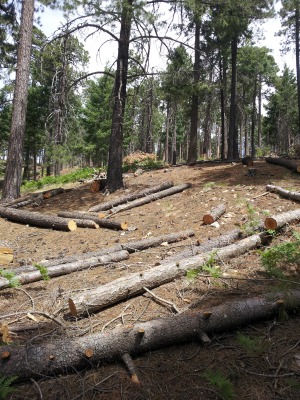 When densely stocked stands are left unmanaged, natural thinning occurs as the more vigorous trees overtop and suppress the less vigorous trees. In mixed stands, a more complex process of changing species dominance and stratification occurs due to differences in shade tolerance and height growth patterns (Smith and others 1997; Hicks 1998). As these dense stands develop, they become more susceptible to natural disturbances such as fire, insects, and disease. The proactive approach is to make a sanitation cut (sanitation thinning), which removes the dead and weaker trees to reduce the spread of disease or injurious insects (Smith and others 1997; Hicks 1998). In addition, smaller trees can be thinned from stands to reduce fire risk by eliminating potential ladder fuels. Much of the removed material will be smaller trees suitable for bioenergy.

Often, thinning and sanitation cuts are financially attractive. Thinning promotes the growth of the most valuable trees and shortens the time to harvestable size. Sanitation cuts reduce hazards in stands and promote the growth of crop trees. Thus, as long as the net cost of harvesting trees for bioenergy is lower than alternative practices, it will be an economically worthwhile investment.

Because the primary aim of thinning treatments is to improve the quality, growth, and health of forest stands, it is critical that harvest entries minimize the amount of damage to the residual stand and overall site productivity. Damage to residual stems during thinning operations typically occurs during felling and skidding activities and can be minimized by using the following strategies:

Beyond minimizing damage to the residual stand, it is also important that thinning entries do not negatively impact the long-term productivity of the site. In particular, harvest entries should be done in a way that minimizes soil damage, such as compaction, rutting, or erosion. The following practices can be used to minimize soil damage during thinning entries, where appropriate:

Other major methods of forest biomass harvesting with silvicultural implications:

Adapted with permission from