When trees are harvested for sawtimber or pulpwood, the stems are either cut to length in the forest before being mechanically forwarded to the roadside or landing or extracted as whole stems (with their branches attached) to the landing prior to being delimbed and/or cut to length. Often 25 percent to 45 percent of the trees’ biomass is left on site as timber harvest residue (also called logging residue), although the amount of residue can be lower, depending on the harvesting equipment used and the condition of the stand (Hakkila and Parikka 2002; Smith and others 2004). 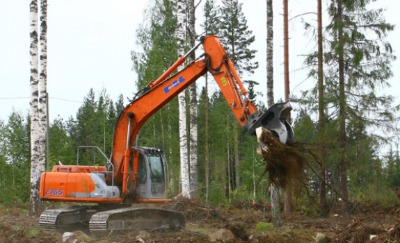 Typically, harvesting of logging residue removes 20 to 30 tons per acre on a green basis (Koch 1985) or about half that amount on a dry weight basis. About 65 percent of the total logging residue easily can be recovered for use as bioenergy (Perlack and others 2005). Such recoverable residue consists of treetops, branches, twigs, foliage, sometimes stumps, and small trees remaining after extraction of the higher-value products.

Harvesting of logging residue is most readily applicable to even-aged silviculture, where stands are clear-cut at the end of the rotation. If whole-tree extraction is used, the residues are available free of charge at the roadside (Andersson and others 2002). Where delimbing or cutting to length occurs in the forest, the residues are frequently collected in a separate two-pass operation. In both cases, the biomass normally is allowed to dry in piles in the forest, reducing the cost of transportation to the industrial plant, maximizing delivered energy, and allowing some foliage to fall from the branches.

Leaving the foliage behind reduces the ash content and increases the calorific value of the biomass fuel source produced and results in the removal of fewer nutrients from the site. Contamination with soil, which decreases the value of biomass fuel, can be a problem. To address this issue, the material normally is chipped prior to transport to the industrial plant, removing most of the soil.

Harvesting of logging residue at the time of clear-cutting has both negative and positive site impacts. The removal of nutrients can be detrimental to long-term site productivity, particularly on lower-fertility sites, if the ash is not returned or fertilizer applied. Reducing the amount of foliage and twigs removed helps reduce the impact of nutrient removal. Also, residue removal may influence biological diversity and can increase erosion on steeper slopes. Moreover, the additional collection of biomass may damage advanced regeneration.

On the positive side, residue removal, apart from giving the owner a direct financial return, may:

For those owners employing uneven-aged systems of silviculture, biomass harvesting may be less profitable or feasible. With selection systems, harvesting is more dispersed through the forest, resulting in scattered residual biomass. The recovery of scattered residues entails increased machine-moving and setup costs. Usually logs, rather than whole trees, are extracted to reduce damage to the remaining trees. However, biomass recovery has been employed in California, where whole-tree extraction was used with group selection and the residues were concentrated at a landing.

Other major methods of forest biomass harvesting with silvicultural implications:

Adapted with permission from

Perlack, R.D.; Wright, L.L.; Turhollow, A.; Graham, R.L.; Stokes, B.; and Erbach, D. 2005. Biomass as feedstock for a bioenergy and bioproducts industry: The technical feasibility of a billion-ton annual supply. Washington, DC: US Department of Energy and US Department of Agriculture, Forest Service. ORNL/TM-2005/66. 73 p.