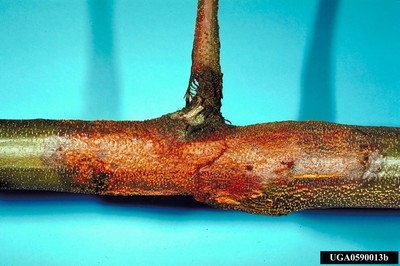 Chestnut blight (Cryphonectria parasitica) has probably had the most pervasive influence on forest structure and composition in the southern Appalachians of any disease or insect. Prior to the introduction of this disease, the American chestnut (Castanea dentata) was the tallest and most dominant hardwood species in the eastern United States (Fig. 2). It grew in vast stands from Maine to Florida, with the largest trees occurring in the southern Appalachians (Schlarbaum et al. 1997). After the introduction of the fungus, which probably arrived on nursery stock from Asia around 1900, native chestnut trees, which had no resistance, quickly succumbed. The fungus enters a host through cracks or wounds in the bark and multiplies rapidly. It produces sunken cankers which expand and girdle the stem, killing everything above the canker, usually in one growing season (Fig. 1). Fungus spores can be transported by wind or on the feet of migrating birds and insects. The disease can spread rapidly — about 24 miles per year (Schlarbaum et al. 1997). By 1929, nearly all counties in the southern Appalachians were infested; by about 1940, most of the standing chestnut trees were dead (SAMAB 1996). 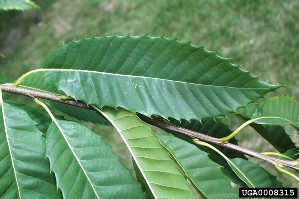 Figure 2. Photo of foliage from an American chestnut tree. Photo by Paul Wray, courtesy of forestryimages.org.

The chestnut blight fungus kills the aboveground portion of trees but does not affect root systems which can resprout. Therefore, American chestnut persists throughout its former range as young sprouts growing in the understory. These sprouts generally live for five to 10 years before being reinfested and killed back by the blight. Often chestnut sprouts reach heights of 25 feet or more, but they rarely flower and bear fruit before dieback. Despite the persistence of sprouts, there is a gradual loss of this species and its genetic resource. Areas with extensive chestnut rootstocks can be identified, and silvicultural practices that favor its shade-intolerant regeneration should be employed to protect or enhance sprout survival.

There have been two primary research approaches to restore chestnuts to American forests: the use of hypovirulent strains and breeding.

Hypovirulence is a virus disease that weakens and slows the chestnut blight virus. Hypovirulence allows a chestnut tree with no resistance to the blight to form slow-growing swollen cankers normally produced only on resistant trees. Scientists have been trying to manipulate hypovirulence to develop an economical biocontrol for blight. However, several obstacles to this approach exist, including: (1) the blight spreads very rapidly in nature, while hypovirulence spreads very slowly; and (2) there are many types of virulent strains in the forest which resist transfer of the virus responsible for hypovirulence. Despite these limitations, hypovirulent strains have been used to bring about recovery from chestnut blight in certain situations (Scibilia and Shain 1989, Anagnostakis 1990, MacDonald and Fulbright 1991, Brewer 1995). For example, some positive results have been achieved by using molecular biology to transfer the debilitating genes of the virus into the fungus (Choi and Nuss 1992, Schlarbaum et al. 1997).

Breeding within American chestnut populations was begun with the occasional surviving trees that were thought to possess some resistance. Enzymatic studies of inner bark tissue revealed small resistance differences among trees (Samman and Barnett 1973, McCarroll and Thor 1985). Cross pollinations were made among putatively resistant trees, but resistance could not be increased to an acceptable level and the approach was abandoned (Thor 1978, Schlarbaum et al. 1997) 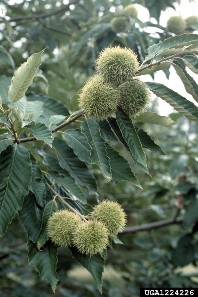 Figure 3. Chinese chestnut and Japanese chestnut display resistance to chestnut blight. Hybridization programs have attempted to breed blight resistance of both of these chestnuts into American chestnuts. Photo by Jerry A. Payne, courtesy of forestryimages.org.

Resistance in Asian chestnut species, particularly Chinese chestnut (C. mollissima) and Japanese chestnut (C. crenata), was evident to scientists in the early 1900s (Fig. 3). Early breeding programs were initiated by state and federal agencies in the 1930s. However, the initial hybrids generated by these programs were not as blight resistant as the oriental chestnut parent. To increase resistance, these first hybrids were crossed back to a resistant oriental parent. Unfortunately, this strategy produced trees that were short and branching and not competitive in eastern forests (Schlarbaum et al. 1997). A number of breeding programs were more successful with the backcross method, which aimed to transfer blight resistance from Chinese chestnut to American chestnut while retaining the desirable growth, form, and adaptability of the American chestnut (Burnham et al. 1986, Burnham 1990). These trials produced two partially blight-resistant first backcrosses (BC1), the “Graves” tree and the “Clapper” tree, which were first-generation hybrids (Schlarbaum et al. 1997).

Although these early breeding programs did not produce a blight-resistant American chestnut, they left a valuable legacy of knowledge and germplasm. There is now evidence that only a few genes control blight resistance in Chinese chestnut, specifically two or three incompletely dominant genes. A genetic map of chestnut with regions associated with blight resistance was identified and could be used to screen newly germinated nuts for blight resistance. This process may enable several generations of backcrossing to be bypassed. The American Chestnut Foundation estimates that by 2012, nuts will be produced from the most blight-resistant breeding lines that can be used in reforestation (Schlarbaum et al. 1997).

Promising results have also been seen with an integrated management approach for American chestnut revival. This approach combines hypovirulence (by inoculation) with blight resistance (grafted). In Virginia’s Lesesne State Forest, trees grafted with blight-resistant strains and inoculated with hypovirulence have been thriving for 20 years, but they are surrounded by nonresistant chestnuts, which are continuously killed back by the blight.

Other Exotic Pests of Chestnut 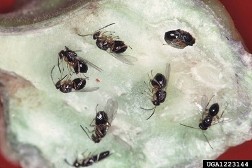 Figure 4. The chestnut gall wasp (Dryocosmus kuriphilus) is an exotic pest of American chestnut. Photo by Jerry A. Payne, courtesy of forestryimages.org.

Chestnut blight was actually preceded by another exotic fungal disease, Phytophthora cinnamomi, which infested southern populations of American chestnut and the related Allegheny chinkapin as early as 1824 (Crandall et al. 1945). This root rot disease constricted the natural range of chestnut to upland areas. On these upland sites, chestnuts are challenged by yet another exotic pest, the chestnut gall wasp (Dryocosmus kuriphilus) (Fig. 4). Chestnut gall wasp larvae feed upon bud and flower tissues, forming a characteristic gall and producing a toxin that can kill the infested branch. Infestations by this insect, which can cause tree mortality, were first reported in 1974 (Payne et al. 1975) and now have spread north into Tennessee and North Carolina (Schlarbaum et al. 1997).

American chestnut seedlings are usually highly susceptible to the blight. In older trees (more than 1.5 inches in diameter at breast height), a resistant individual can slow down progress of the disease and may survive in spite of blight, but it is not immune. Many kinds of environmental stress may break down a tree’s resistance to blight. Indeed, at high elevations in areas exposed to severe climate, normally resistant oriental chestnuts have been killed by blight.

Even where all the American chestnuts have been killed, the blight fungus is still present. Planting of so-called “blight-free” chestnuts has been widely publicized, but this practice is ineffective. “Blight free” merely means a tree is uninfected when grown in an area where no blight is present such as outside the natural range or inside a greenhouse. This is no guarantee that the tree will not contract blight in the future. Furthermore, this practice raises false hopes among the public and may discourage research funding (SAMAB 1996).

For more information on this disease, see Revitalization of the Majestic Chestnut: Chestnut Blight Disease at the American Pathological Society’s website.

Adapted for eXtension by Thomas DeGomez, University of Arizona