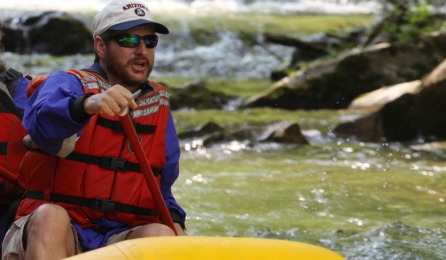 Christopher Jones began working as a Cooperative Extension agent for the University of Arizona in Gila County, Arizona, in 1999. He has been involved in extension work since graduating with a B.S. degree in Forestry at Northern Arizona University in 1988, the same year he joined the Peace Corps. As a volunteer, Chris worked with subsistence farmers in Guatemala to intercrop with various tree species and conserve soil by creating and building contour barriers. He thought so much of that experience that he pursued and earned an M.S. degree in Renewable Natural Resources at the University of Arizona in 1995. Chris went back overseas on contract to serve as the territorial forester of American Samoa and manage the U.S. Department of Agriculture’s State and Private Forestry programs from 1996 to 1999. As an Arizona native, he was thrilled to come “home” and start a career as a county Extension agent close to family.

In 2009, he acquired USDA National Institute of Food and Agriculture funding to organize and conduct a National Workshop on Climate and Forests. The workshop was held in 2011 at Northern Arizona University in Flagstaff, Arizona, as an event sponsored by the Society of American Foresters. It brought together more than 200 forest practitioners, researchers, and educators to learn about and discuss the current state of forests and climate change. As an outcome of the national workshop, Chris co-founded the Climate Science Initiative under the auspices of the Association of Natural Resources Extension Professionals. Through the CoP and initiative, Chris seeks to build capacity within the Cooperative Extension system to address climate change issues as they affect forests and natural resources. Chris also leads the Gila County Master Gardener program. Through the years, he has managed programs in watershed and water (Master Watershed Stewards), forest health, noxious weed management, and Wildland Urban Interface wildfire mitigation (Arizona Firewise).