Written by Tom DeGomez, University of Arizona
Forest disease organisms and abiotic occurrences that lead to diseased trees are common in terrestrial ecosystems. Most of the disease organisms within forests are essential to the health of the system and are present at background levels, generally occurring on weakened members within a forest stand. Occasionally, diseases can overcome a forest system and a stand-replacing event will occur, but this is a rare event even in the least resilient forests. The full effect of rapid climate change on forest diseases and their hosts has not been fully realized in most forest systems. 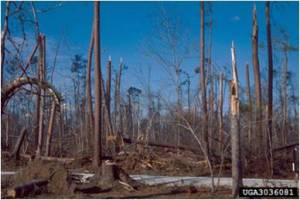 As climate continues to warm more rapidly than in previous eras, plant pathologists are becoming increasingly concerned with several issues. They are uneasy about the prospect that abnormal weather events will contribute to increased tree stress. These types of weather events have been seen in the past few decades and include warmer summers and winters, seasonally increased or decreased levels of moisture, and increased intensity and frequency of storms such as hurricanes (Fig. 1). They are also concerned about how disease organisms will adapt to increased warming. Because most disease organisms function best at a fairly narrow range of environmental conditions, with moisture and temperature being two of the most key conditions, some organisms may flourish in the new climatic conditions, whereas others will not. Some organisms may become pests outside of their “normal” range where climate was not conducive to their development in the past.

For more on Climate Change Impacts on Forest Diseases: