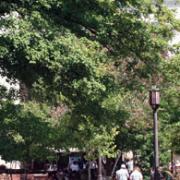 Urban forestry managers can find it useful to assess their cities’ programs using a cost-benefit analysis, many of which have been incorporated into the free online tool iTree, developed by the U.S. Forest Service with collaborators. Species selection can influence both the quantitative and qualitative values of the urban forest as discussed below.

The Importance of Diversity

The metaphor comparing biological diversity to financial diversity is particularly apt in urban forests, where trees provide benefits that can be tallied. Similarly, having a diverse portfolio of species can spread the risk of future problems, while relying on only a few species can be risky.

For example, in Bismarck, North Dakota, American elm (Ulmus americana) and green ash (Fraxinus pennsylvanica) comprised half of all public trees at the time of the survey and accounted for 72 percent of the city’s annual benefits. Yet several midwestern states have seen their elm populations decline due to Dutch elm disease and their ash populations decimated by the emerald ash borer (Agrilus planipennis or A. marcopoli). A catastrophic loss of one or more of these species in Bismarck would leave large structural and functional gaps in the municipal forest.

Similarly, in Fort Collins, Colorado, young trees comprised more than half of the urban tree population, with green ash and honey locust (Gleditsia triacanthos) accounting for a quarter of the benefits attributed to young trees. Since the study, managers have been making an effort to diversify the planted species, adding varieties of white ash (Fraxinus americana), oak (Quercus spp.), maple (Acer spp.), and linden (Tilia spp.), which should help stabilize the forest as it matures.

Using size as a proxy for age, Richards (1983) identified an “ideal” distribution for municipal forests as having about 40% of the urban tree population in the smallest diameter class (less than 6 inches in diameter). Too many in the smallest class means the urban area is not yet receiving the full benefits of a tree canopy. When too many trees are in the larger diameter classes, concerns arise about mortality and replacement.

Species with greater longevity can require less fertilizer and maintenance, including removal upon mortality. The Urban Forest Protocol requires planting projects qualifying for carbon offset credits to be sustainable for 100 years, so short-lived trees, such as poplars (Populus spp.) might not be as suitable for such projects as trees with greater expected longevity.

The value of trees as assessed in this study relates largely to the value of real estate. The concept that trees can provide a measurable increase in real estate value goes back to an assessment by Anderson and Cordell (1988), which found that each large front-yard tree was associated with a 0.88% increase in sales price. Mainly because of differences in property values, for trees in Berkeley, California, aesthetic benefits averaged $67 per tree, more than triple the $21 average value per tree in Bismarck, North Dakota.

Trees contribute to air quality in several ways. In addition to using the greenhouse gas, carbon dioxide, in photosynthesis, trees collect other pollutants on their leaves. These include ozone, nitrogen oxide, sulfur dioxide, and particulates – all of which can create problems for people with asthma and other health conditions. Some tree species, however, release volatile organic compounds that can lead to the production of health-damaging ozone. Species that emit relatively high levels of these compounds include eucalyptus (Eucalyptus spp.), sweetgum (Liquidambar spp.), plane tree (Platanus spp.), and coast live oak (Quercus agrifolia). The effects of urban forests on air quality are described in more detail in Urban Forests and Pollution.