Soil fertility can be maintained when nutrients are efficiently recycled through the soil food web and soil-plant-animal system. Nutrient cycling is conveniently illustrated in diagrams that range from very simple (Fig. 1) to extremely complex (Fig. 2). 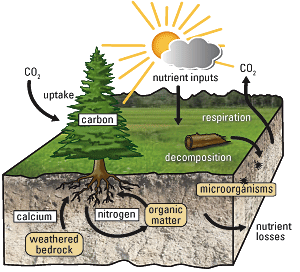 Figure 1. This diagram illustrates how most nutrients within forest ecosystems are cycled within the system. Source: US Geological Survey

The basic plant nutrient cycle highlights the central role of soil organic matter. Cycling of many plant nutrients, especially N, P, S, and B, closely follows parts of the carbon cycle. Plant residues, animal waste, and other plant-derived foods are returned to the soil. This organic pool of carbon compounds becomes food for bacteria, fungi, and other decomposers. As organic matter is broken down to simpler compounds, plant nutrients are released in available forms for root uptake, and the cycle begins again. Plant-available K, Ca, Mg, P, S, and some micronutrients are also released when soil minerals and precipitates dissolve, which constitute significant losses to the system. 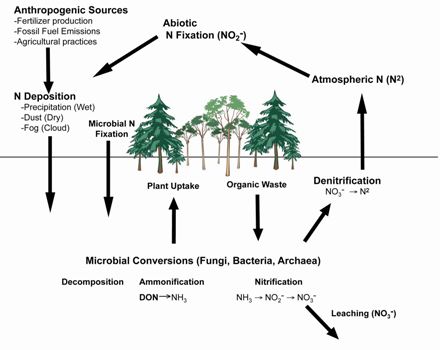 The nitrogen (N) cycle (Fig. 2) is the most complex nutrient cycle. N exists in many forms, different physical states as well as both organic and inorganic compounds, so transformations between these forms make the N-cycle resemble a maze rather than a simple, circular cycle. Biochemical transformations of N, such as nitrification, denitrification, mineralization, immobilization (assimilation), and N-fixation, are performed by a variety of soil-inhabiting organisms. Physical transformations of N include several forms that are gases, which move freely between soil and atmosphere. Although the N-cycle is very complex, it is probably the most important nutrient cycle to understand. There are two reasons for this:

Nutrient cycling is not 100% efficient. There are always some losses or “leaks” from the cycles, even for natural ecosystems. Careful monitoring of soil nutrients is important for maintaining sustainable plant growth in many managed ecosystems. Cooperative Extension programs in your area can provide additional expertise on how to manage and monitor soils, which can be altered due to changes in temperature and water availability.

For more on Forest Soils: