Adapted from Effects of Climatic Variability and Change on Forest Ecosystems: A Comprehensive Science Synthesis for the U.S. Forest Sector
Original article may be found at : http://www.fs.fed.us/pnw/pubs/pnw_gtr870/pnw_gtr870.pdf

Forests of the Southeastern United States are a complex mixture of private and public land, interspersed with rapidly urbanizing areas and agriculture. A long history of active forest management, often including intensive management such as forest plantations, fertilization, and prescribed fires, creates stand conditions and management regimes that differ from those in other areas of the United States.

Wildfires, hurricanes, drought, insect outbreaks, and pathogen outbreaks have been a driving force for millennia in southeastern forests. However, during the past two centuries, the type and magnitude of ecosystem stress and disturbance have changed and will likely continue to change as the climate warms (Dale et al. 2001). Wind and extreme precipitation events associated with hurricanes can have significant effects on southeastern forests. Extreme precipitation events that accompany hurricanes can cause extended submersion of low-lying forests, which can kill tree roots by causing anaerobic soil conditions (Whitlow and Harris 1979).

Wildfires are a natural component of ecosystem maintenance and renewal in the southeast, which has more area burn annually, with wildfire and prescribed fire, than any other region of the United States (except Alaska in some years) (Andreu and Hermansen-Baez 2008). Future fire potential is expected to increase from low to moderate in summer and autumn in eastern sections in the South, and from moderate to high in western portions of the South (Liu et al. 2010).

Insect and pathogen outbreaks are increasing in southeastern forests (Pye et al. 2011). Higher temperature has caused a longer growing season of at least 2 weeks compared to historical lengths, allowing additional time for insects and pathogens to find trees that are more susceptible and to colonize trees to form new points of spread (Ayres and Lombardero 2000). In addition, timing of the predator prey cycle may be changing. For example, when the growing season begins earlier, insects may be hatching and maturing before migratory insectivorous bird species return, allowing more insects to reach maturity, speed up the reproductive cycle, and locate susceptible host trees.

Higher temperature and subsequent soil drying increases stress in trees, reducing their physiological capacity to resist attack (McNulty et al. 1998a). If the trend of increasing frequency and severity of insect outbreaks continues, the productivity and large-scale structure of forest ecosystems will be altered significantly.

A combination of increased population, changing land use patterns, and shifts in rainfall patterns could further amplify water shortages, and even if precipitation rates remain unchanged, higher tree water use with higher air temperature, or shifting management regimes for new products such as biofuels, could contribute to water shortfalls (Lockaby et al. 2011, Sun et al. 2008). The seasonal timing of precipitation within the year could also affect water supply. If precipitation occurs in fewer, more intense events, then proportionally less water will be retained by forest ecosystems, and more will be lost as runoff, potentially causing flooding, soil erosion, and stream sedimentation (Trimble 2008). 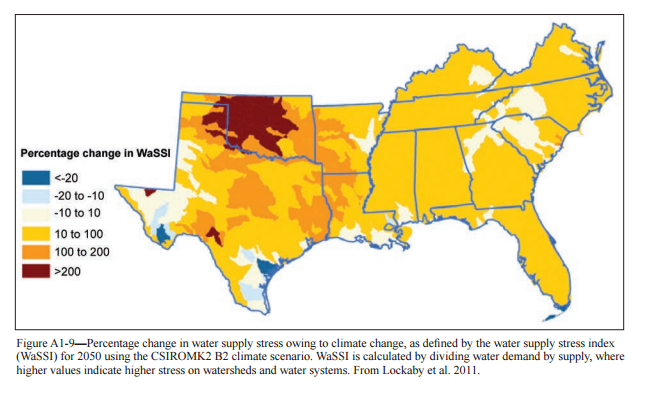 Ayres, M.P.; Lombardero, M.J. 2000. Assessing the consequences of global change for forest disturbance from herbivores and pathogens. The Science of the Total Environment. 262: 263-286.