The southern pine beetle (SPB), which attacks all species of pines (in the southern United States), prefers loblolly, shortleaf, Virginia, ponderosa, and pitch pines but seldom attacks longleaf pine. Recently, SPB has been observed to successfully infest white and Table Mountain pines. Mature trees in pure, dense stands have long been considered most susceptible to SPB attack, but in recent years unthinned pine plantations have increasingly supported SPB infestations. Trees less than five years old or 2 inches in diameter are seldom attacked. During outbreaks, SPB activity peaks in early summer in the Gulf states and in late summer and early fall farther north. 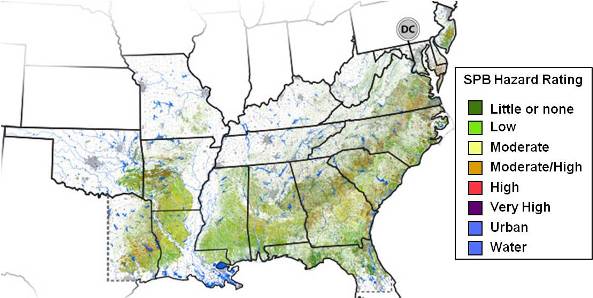 Since 1960, a SPB outbreak has occurred somewhere in the South almost every year. Outbreaks, which may last three to six years, have been most severe and persistent in southeast Texas and southwest Louisiana; central Mississippi; the Piedmont of Alabama, Georgia, and South Carolina and the Coastal Plain of Georgia; and North and South Carolina (Figures 1 and 2). Ridgetop pine ecosystems for which control options are extremely limited are of special concern to ecologists and forest managers (Figure 1). 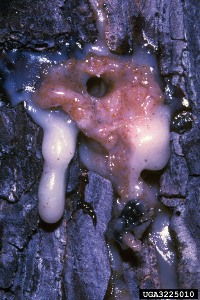 Colonizing bark beetles attack living trees and emit specialized chemicals called pheromones. These pheromones combine with volatiles released from the host tree to call in large numbers of beetles that mass attack a tree. The female begins constructing a gallery and is joined by a male. Both males and females may “re-emerge” or leave the host to infest another tree. During peak attack, there may be several thousand beetles involved in the attack on a tree.

Healthy trees respond to beetle attacks by exuding copious amounts of pitch or sap. The pitch and sap may exude from the entrance holes and harden on the bark surface to form pitch or resin tubes that are characteristically sized and shaped (Figure 3). This defensive response of the attacked tree can sometimes “pitch-out” the attacking beetles (Douce 1993).