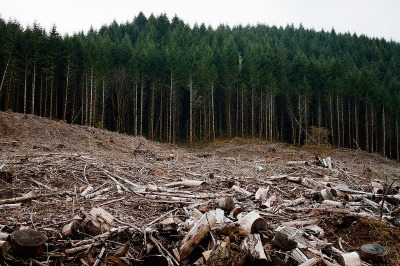 The term “even-aged forest” sometimes brings forth images of trees “grown like cabbages,” as Aldo Leopold once described an agronomic approach to forestry. However, even-aged forests can form naturally. Crown fires, severe hurricanes, prior cultivation, and similar large-disturbance events can lead to even-aged stands as trees seed into the affected land.

Sometimes people are skeptical of this concept because they have seen many forests made up of trees of varied sizes. But it is important to remember that a large tree is not always an old tree and a small tree is not always a young tree. This observation is particularly true with shade-tolerant species. It is common to measure the age of a four-inch-diameter shade-tolerant tree and discover that it is nearly the same age as a tree ten times larger growing right next to it.

Moreover, the term even-aged does not mean that all the trees in a stand are the exact same age. By definition, an even-aged stand is one in which the trees are within 20 percent of a given age, relative to the rotation length. Rotation length is the period of time that forest trees are grown before they are cut and a new regeneration cycle starts. For example, the trees in an even-aged stand with a 100-year rotation length might have an average age of 40 years, with some trees as young as 20 years old, and others as old as 60 years old.

With the clear-cut system, all the trees in a unit are harvested in one operation, and the area usually is reforested by planting, unless abundant natural seeding is expected. Units can vary in size and shape, but generally harvesting anything larger than a group selection (one to three acres, depending on the size of the dominant trees for the site) can be called a clear-cut system.

The seed-tree system is like a clear-cut system, except that five to ten trees per acre are left evenly distributed across the site to produce tree seed. The seed trees are usually harvested after new seedlings are established.

The clear-cut and seed-tree systems tend to open up sites fairly dramatically. Consequently, they may not be good choices for very dry sites or for owners who are not committed to prompting regeneration by tree planting if needed.

The shelterwood system is similar to the seed-tree system, except that more trees are left to shelter the site on which new seedlings will be regenerating. This system is commonly used on hot, dry sites and where aesthetic qualities are critical. Shelterwood harvests may be made in two or three entries, with small trees removed in one harvest, more trees removed in a second “seed cut,” and seed trees removed in a third harvest after new seedlings are established. In some regions of the United States, shelterwood cuts are commonly done in two cuts, like with the seed-tree method but with more trees left to provide seed before the final harvest.

All three systems usually include some thinning over the life of the forest. Typically, these systems include one pre-commercial thinning (so-called because the trees cut are too small to be taken to a mill) and at least one commercial thinning later. For more information on thinning, see the following articles: