Extreme events, such as floods, heat waves, and hurricanes, are rare weather occurrences that often cause the greatest damage to society. In the yearly distribution of rainfall, for example, extreme precipitation events that cause flooding occur less frequently than the “average” rainfall events, but the economic toll of floods is many times greater.

Any climate variable can be characterized by a probability distribution, which conveys the likelihood that an event will occur. Often, these distributions have a shape similar to a bell curve, with the average and, therefore, most frequent condition occurring in the middle and extreme events falling at the ends of the frequency distribution (Figure 1). In the case of an increase in the average temperature, the number of days with extreme temperatures will also increase, while the number of days with cold temperatures will decrease. 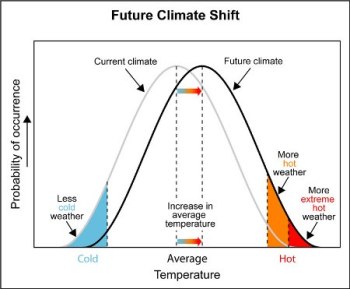 Figure 1. Using a normal distribution, or bell curve, to represent natural variation in temperature from an average, this figure illustrates how climate change will not only affect average temperatures but also extremes. Because projections are for warmer temperatures, this implies more hot and extreme heat days than what has occurred in the past.

Although it is difficult to attribute the cause of any one event to global warming, there is solid theoretical justification for expecting the frequency and/or magnitude of some extreme events to increase in the future. It is also likely that while some events will become more common and powerful, others will become less frequent and intense, such as in the temperature example mentioned above.