In the Great Plains, climate change is expected to bring both an increase in the likelihood of intense drought and heat waves- even as the trend toward more intense precipitation and other factors heightens the risk of floods. The Great Plains features a variety of weather hazards, from winter snowstorms in the north to hurricanes in the south.  Much of the region is devoted to agriculture, with only slightly more than 10 percent of land cover featuring forests, much of these in western Montana and Wyoming.

Temperature overall has risen somewhat more rapidly in the northern part of the Great Plains compared to the southern region (Figure 1). By mid-century, the number of days with temperatures reaching above 100 degrees Fahrenheit is projected to quadruple over the southern portion of the region beyond its current average of seven days per year. In the north, the number of these 100-degree days is expected to double. 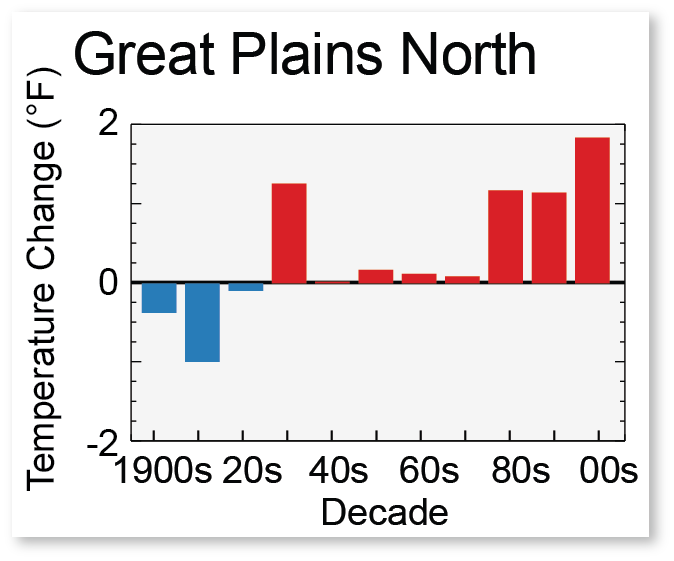 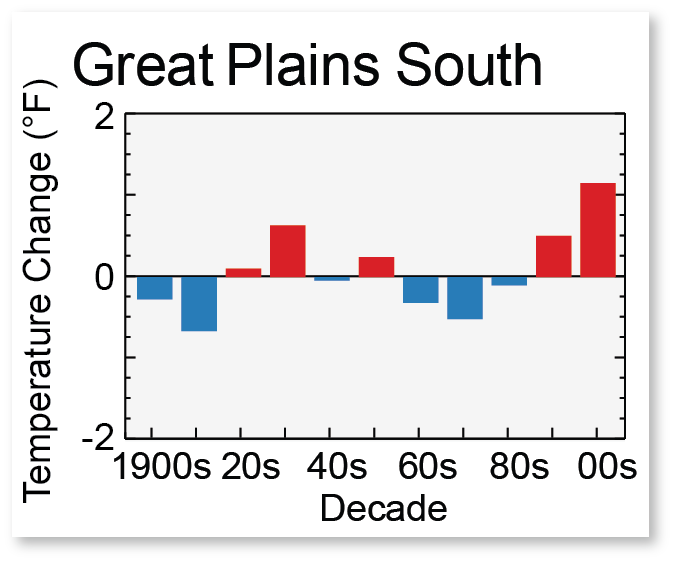 The warming temperatures overall are expected to increase the growing season by more than three weeks by mid-century relative to the last three decades of the 20th Century. While benefits of the warmer temperatures will include less cold stress, negative consequences include the ability of some pests and invasive plants to survive warmer winters or have time for additional breeding periods in longer growing seasons. Shifts in the timing of flowering can also disrupt food availability for migrating birds and pollinators, and otherwise alter relationships between plants and animals. Also, a warm spell that breaks winter dormancy, such as by inspiring trees to leaf out or flower, can be problematic if followed by a spring freeze.

Rainfall events have become more intense in recent decades, and this trend is likely to continue. Recent decades indicate at general increase in precipitation in both the northern and southern portions of the region (Figure 2). Northern states such as Montana and the Dakotas are likely to see an increase in future precipitation in winter and spring. Even so, the area will remain vulnerable to periodic droughts, especially in summer and fall. 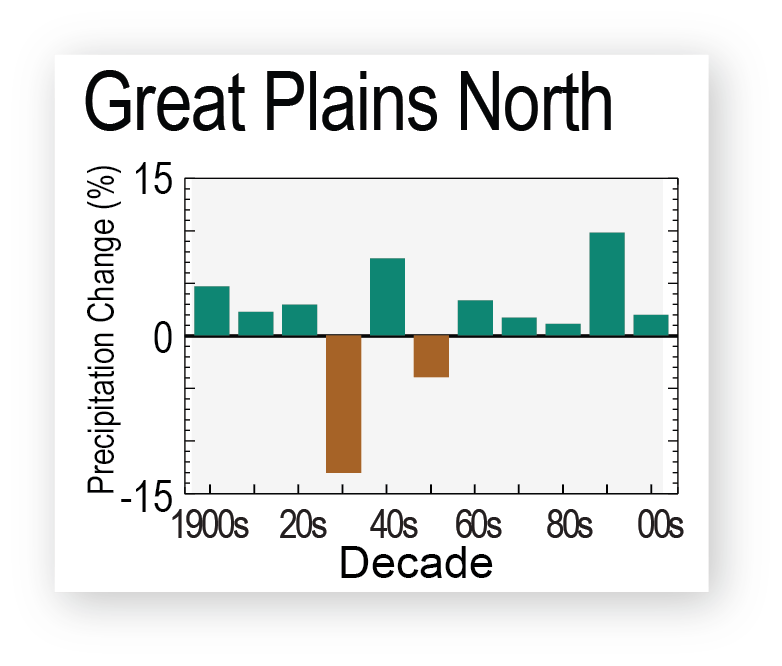 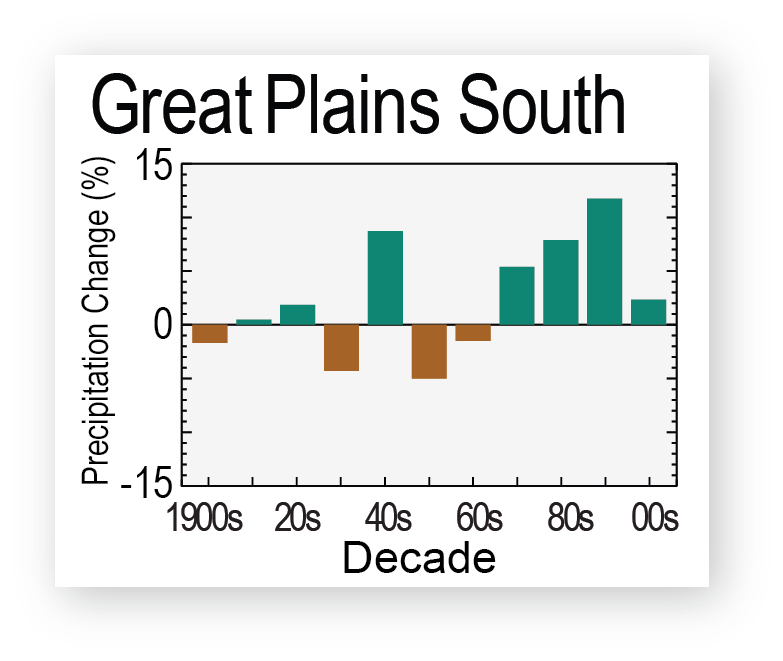 Figures 2a, 2b.  Average precipitation differences by decade for 1901-2012 (relative to the 1901-1960 average) for the Great Plains in the north (left) and in the south (right). The far right bar in each graph is for 2001-2012. (Figure Source: NOAA NCDC/CICS-NC, at http://nca2014.globalchange.gov/report/our-changing-climate/precipitation-change#tab2-images)

The northern Great Plains can also expect an increase in the number of days with heavy rain or snow. As has been occurring along the Red River, a combination of increased snowfall, rapid warming in spring and more extreme rainfall can yield damaging floods. In years that don’t lead to flooding, the additional soil moisture expected can encourage growth of trees.

At the same time, the higher evaporation rates that come with higher temperatures also increase risks from drought, including wildfire hazard. The Great Plains region overall tends to see evaporation rates that exceed precipitation rates, and the region will remain susceptible to periodic droughts, especially during the warm season. Large parts of Texas and Oklahoma are expected to face longer dry spells, with increases on the order of 5 additional days by mid-century (Figure 3). The central and southern Plains could see a decline in precipitation overall. 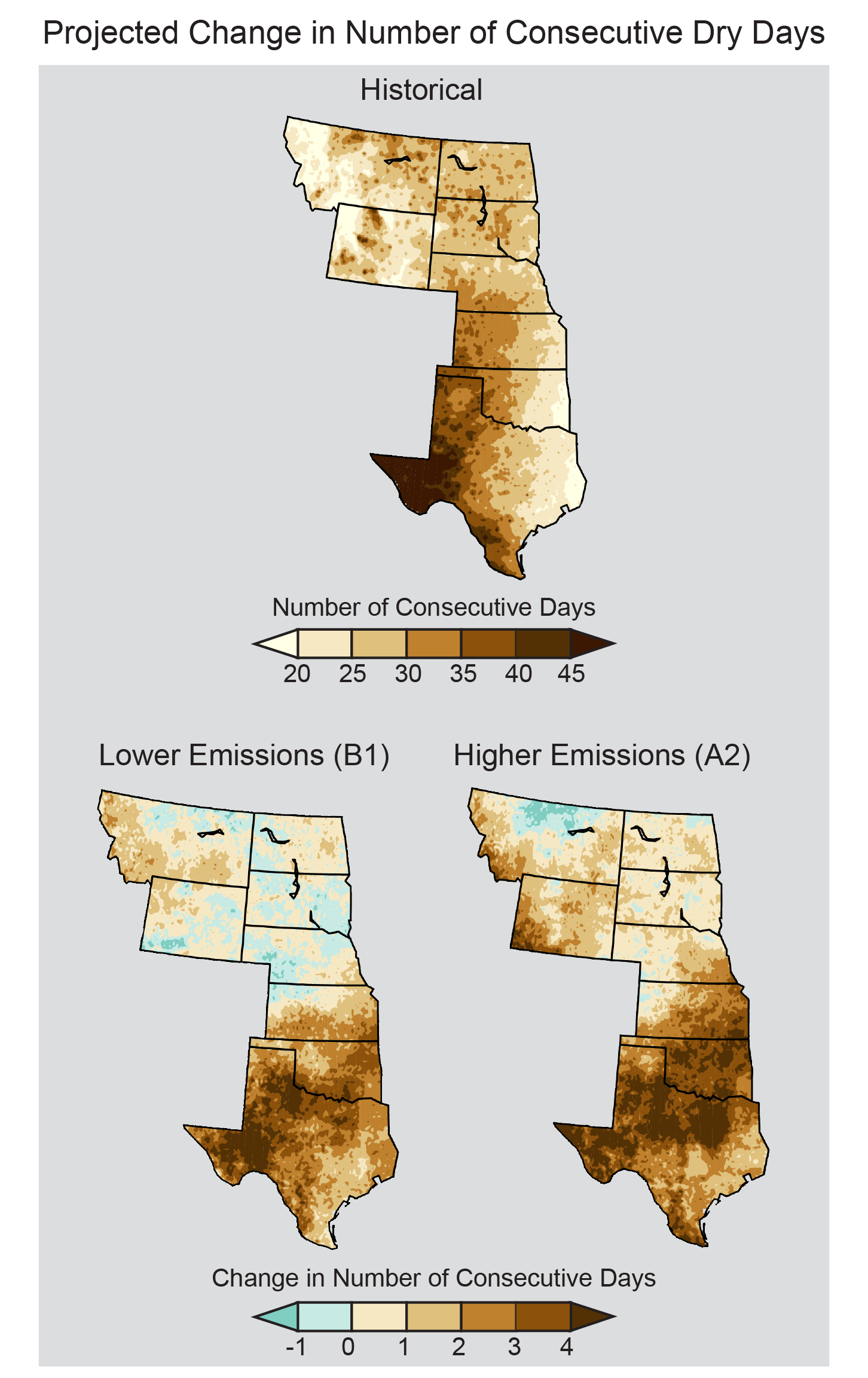 Trees and other plants may need less water overall for a given temperature as a result of the additional carbon dioxide in the air. As the levels of this airborne heat-trapping gas rise, plants may experience an increase in their water use efficiency. In other words, they can create more tissue from the same amount of water, or maintain the status quo with less water.

For more insights on how climate change is affecting and is projected to affect the Great Plains, see http://nca2014.globalchange.gov/node/5761.