Greenhouse gases such as carbon dioxide, methane, and water vapor are naturally part of the Earth’s atmosphere. These gases act as powerful amplifiers of temperature, helping elevate the average temperature in the lower atmosphere to a comfortable 60° Fahrenheit. Without greenhouse gases, the average near-surface conditions would be cold enough to freeze water, at approximately 0°F.

The greenhouse gas effect functions by trapping in the atmosphere heat from the Sun’s radiation. The greenhouse gases can be thought of as creating a two-way mirror — they allow the short wavelength energy emitted by the Sun to pass through the atmosphere and warm the Earth’s surface, but they do not allow all the longer wavelength energy radiated by the Earth back to space. This trapping effect causes the atmosphere near the Earth’s surface to be warmer than it would be without the gases (Fig. 1). Scientists have measured the heat-trapping effect of greenhouse gases since the mid-1800s; as early as the first decade of the 20th century, a few scientists predicted that the average temperature of the lower atmosphere would gradually increase as the greenhouse gas concentration rose — a prediction that is currently being observed. 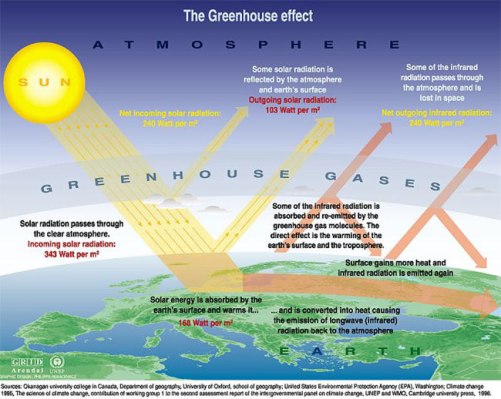 For the past 650,000 years or so, the atmospheric concentrations of the potent greenhouse gas carbon dioxide (CO2) has wiggled up and down between approximately 180 and 300 parts per million (ppm), with the pre-industrial concentration referenced as 280 ppm. In 2007, CO2 concentrations surpassed 383 ppm.

Global climate models suggest that the greenhouse gas effect will help cause the average global temperature to increase between 3° and 8°F, with the best estimate approximately 5°F, when CO2 concentrations are double what they were prior to the industrial revolution in the mid- to late 1700s, or at approximately 560 ppm. At current rates of CO2 increases, 560 ppm will be surpassed in about 75 years. Changes in temperature, however, are slower than increases in CO2 concentrations; if CO2 reached 560 in 75 years, a 5°F temperature change would occur in subsequent years.

Adapted for eXtension.org by Michael Crimmins, University of Arizona