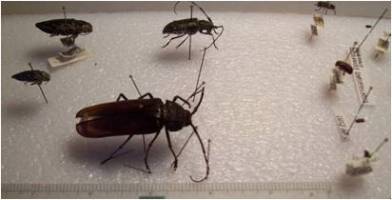 Insects perform many roles within forests as pollinators, herbivores, carnivores, decomposers, and food sources for other organisms. As a group, they are the most abundant and important group in the phylum Arthropoda, and by 1972 more than 900,000 species had already been described. They are estimated to account for more than 80% of all known animal species (Baker 1972) and have been around for a long time, with fossil specimens of forest roundheaded borers having been found from 35 million years ago (Furniss and Carolin 1977). Most are innocuous or beneficial to human existence, though they are more commonly known for the few species that irritate us directly or are harmful to the plants we try to grow.

The most studied forest insects are those that cause noticeable damage to trees. They can be loosely separated into these categories:

Of the latter group, bark beetles (or scolytids) are a commonly known group with many species, most of which are rare and innocuous. One hundred fourteen species alone have been collected from the state of Idaho and immediate surrounding areas (Furniss and Johnson 2002) of which less than a dozen can directly kill trees. A significant number of insect species also directly prey on bark beetles and other insects and thus would be categorized by humans as beneficial. These include predatory beetles, wasps, hornets, and ants. In general, forest insects are a primary source of much biodiversity in forests because they are highly important food sources for many animals and responsible for much of the nutrient cycling that allows trees and plants to grow. Even the mighty grizzly bear has been found to rely primarily on eating moth larvae to build necessary fat reserves in higher elevation zones within the northern Rocky Mountains. 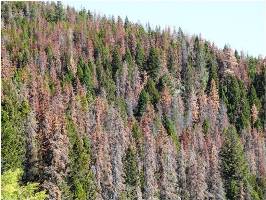 A healthy native insect population in a forest is an essential part of that forest ecosystem. Over millennia, insects and trees have co-evolved and thus native assemblages of trees and insects rarely eradicate each other today. Individual insects are actually quite fragile and sensitive to changes in their environment. Most manage to maintain themselves by having a very high rate of reproduction to compensate for high mortality rates. As forest conditions change, either from a disturbance process such as fire, landslide, or hurricane or more subtle changes in climate such as milder winter temperatures, tree species may change their dominance across landscapes, and insect populations will follow. For example, current bark beetle epidemics across the western United States could not occur if host trees were not abundant – which is the result of previous wetter climates and fewer wildfire occurrences. Climatic changes such as drought can give certain insect species a short-term advantage that also allows them to build into epidemics or invade into areas where they could not previously survive.

Figure 3. Spruce budworm is a moth that lays eggs preferentially on true fir and Douglas-fir trees and whose hatched caterpillars eat current year’s needles. In outbreaks, these insects can defoliate entire forests, though they usually only weaken trees and do not kill them outright. If an outbreak lasts more than four to five years, trees will start to die. Caterpillars spin silk to attach themselves to trees. If they fall off, they usually are caught and eaten by forest floor-dwelling ants. Photos courtesy of Peter Kolb, Montana State University.

Exotic insects are one of the biggest threats to native forest ecosystems. Because the insects and trees did not co-evolve, the trees often do not have any natural defenses against the insect, and local tree populations can be severely affected. Eventually, some trees within a species can have a mutated gene that provides them with a resistance mechanism allowing for a slightly altered version of that species to repopulate itself, though if left to nature, such a process can take hundreds or thousands of years. Introduced gypsy moth and emerald ash borer have had devastating consequences on native forests. Human intervention can sometimes help moderate the effects of exotic introductions, but this is costly and sometimes not as effective as might be desired. Climate change is another mechanism through which exotic insect species can migrate into new territories. For example, major concern exists that mountain pine beetle, native to the western United States, will be able to travel north across the boreal forest to infest eastern jack pine as the climate warms. It has previously been excluded from this region by lethally cold winter temperatures. 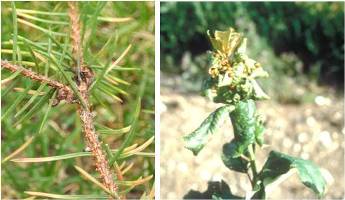 Figure 4. The spruce scale (left) is a sucking insect that crawls up new shoots, inserts its mouth parts under the bark of the stem and then loses its legs, and forms a protective shell over itself. Hundreds of new eggs are then laid under the shell, and the process starts over again. Lady beetles (right) are predatory beetles that as larvae and adults feed on aphids – another form of sucking insect – and are considered beneficial by humans because aphids attack and weaken ornamental trees and shrubs. Photos courtesy of Peter Kolb, Montana State University.

Resources available in this section: