Competition for resources (moisture, light, nutrients) is fierce in the often resource-limited environments of the desert Southwest. Species native to the desert Southwest have special adaptations to take advantage of short-lived moisture sources and to endure long drought periods (Dimmit 2000). Other arid places in the world besides the southwestern United States support similar vegetation communities, but the climate of Arizona has unique features important to the interaction between native species and non-native invasive species.

Climate influences vegetation patterns at many different scales across the desert Southwest. Small-scale, short-duration monsoon-season thunderstorms can bring much-needed precipitation to small patches of vegetation, or they can initiate widespread flooding, creating a window of opportunity for invasive plants to thrive where flood-prone native plants are lost. Long-term variations in climate related to ocean circulation patterns (ENSO) can create multi-decade wet or dry periods that can promote large-scale increases in the populations of certain species (wet periods) or large-scale mortality (dry periods) (Allen and Breashears 1998). 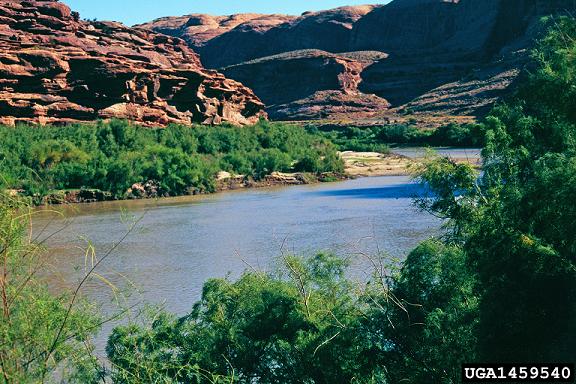 Increasing evidence suggests that direct or indirect impacts of extreme climate variations may give some invasive plants a competitive edge over a number of native species (Dukes and Mooney 1999). For example, extreme droughts may result in the loss of some native species but enhance populations of invasive plants that are better adapted to warm, dry conditions and have high reproductive rates.

Riparian zones of the Southwest are highly influenced by annual variations in both precipitation and temperature. In Arizona lowlands, riparian zone degradation has been linked to the invasion of tamarisk or saltcedar (Tamarix spp.), a non-native invasive shrub that is both flood- and drought-tolerant. With long-term continued warming and drought, tamarisk has the potential to invade higher elevation riparian zones and displace native riparian plant species such as cottonwood (Populus spp.) and willow (Salix spp.). Once established, tamarisk is very difficult to remove, even with a return to wetter and cooler conditions.

Related to Invasives in the Southwest: