Jet streams high in the atmosphere direct where moisture lands on the surface. Global climate models (GCMs) generally do a good job at simulating jet stream activity, especially in the mid-latitudes – roughly 40 to 70 degrees north of the equator. Indeed, this is considered one of their strengths. Even so, potential problems include inadequacies where the mid-latitudes interact with the tropics (Bader et al. 2008) — namely, the subtropics, roughly centered around 30 degrees from the equator.

Jet streams can be seen as meandering rivers of air, generally located about 30,000 to 40,000 feet above sea level. The polar jet stream occurs consistently along the polar front, where cold air meets warm air, fueling many mid-latitude storms. Occasionally, the polar jet stream dips down into the low mid-latitudes, influencing precipitation and temperature in the southwestern United States. A separate, and somewhat less consistent, subtropical jet stream occurs between 20 and 40 degrees latitude from the equator.

As their names imply, the polar jet stream can help carry cold air southward, while the subtropical jet stream can help usher in warm, humid conditions. The subtropical jet stream in North America is more likely to get a boost during El Niño years, wielding a large effect on winter precipitation along the southern tier of U.S. states. Thus, recent improvements in modeling El Niño variability in the distant tropics have implications for modeling regional jet stream activity and its effect on winter precipitation.

Still, only about a third of the 18 GCMs tested were identified as having a relatively realistic interpretation of El Niño fluctuations (Bader et al. 2008). The most skillful models tend to have relatively high resolution — with some as fine as 500 square miles — in the tropical Pacific, where El Niño has its greatest effect on sea surface temperature.

In general, modelers have found it challenging to capture the historic year-to-year variability of the subtropcial jet stream in the northern hemisphere, including a recently observed shift toward the poles. Several research teams have shown a poleward shift of this jet stream, linked to the expansion of the Hadley cell circulation Seidel et al. 2007, Hu and Fu 2007). Researchers at the University of Arizona have linked the poleward shift of the jet stream to drier southwestern springs in the time frame they considered, from 1978 to 1998 (McAfee and Russell 2008).

In addition, the poleward shift of the jet stream observed for the past several decades means that the regional impacts of El Niño could change along with global climate. This remains difficult to model at any scale. 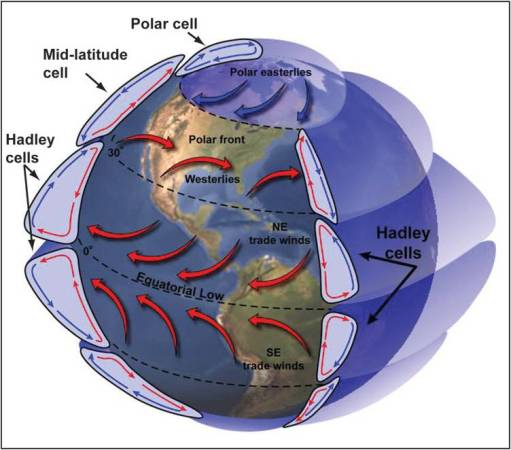 The subtropical jet stream resides around the descending branch of the Hadley cell, shown in this idealized graphic at about 30 degrees in latitude. The polar jet stream resides along the polar front, where it tends to reinforce the temperature difference on either side of the front. In reality, both jet streams often meander widely north and south rather than following the straight (zonal) pattern shown here. Credit: Barbara Summey, NASA Goddard VisAnalysis Lab

For more on Regional Climate Models: