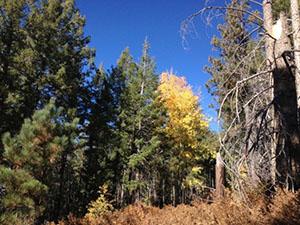 By Martha Gebhardt, School of Natural Resources and the Environment, University of Arizona

Forest vulnerability is expected to increase in decades to come, according to a draft of the National Climate Assessment released in January of 2013. The report stated that as temperatures continue to rise, droughts, insect outbreaks, and wildfires would all occur more regularly. The forestry chapter of the report presents current climate change projections, and possible opportunities and mitigation strategies recommended for forest owners.

Every forest is unique, making a one-size-fits-all solution impossible. Additionally, tree mortality often occurs because of a combination of factors rather than one specific cause. 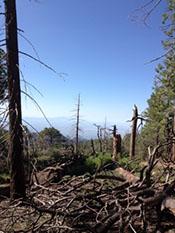 For example, the bark beetle outbreak that has been occurring for the last decade in the Southwestern, U.S. can spread so quickly because trees are already often stressed by lack of water, especially in semi-arid environments. As temperatures rise, so do evaporation rates. This stresses trees out further. Because the trees are already weak, they are not able to protect themselves from infestation. For instance, a healthy tree can sometimes expel beetles with its sap.

Spraying trees with insecticide poses its own risks and will not solve the root of the problem. If a tree is not getting enough water, it can die even without the intervention of a beetle.

The report also predicts that there will be major changes in the species composition of forests on more than 5 to 20 percent of U.S. land area by 2100. Tree species have “ideal environments” in terms of temperature and moisture. If temperatures and moisture are changing so that they no longer support certain tree species in a particular area, the species will shift their ranges as well to follow their niche.

U.S. forests are currently able to absorb an estimated 13 percent of all U.S. carbon dioxide emissions from fossil fuels such as coal, oil, and gas. With tree mortality expected to increase as global climate warms from the input of additional greenhouse gases, this percentage is likely to decrease given existing forest practices. 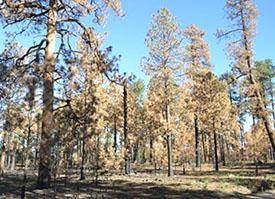 Forest owners can implement strategies so their forests can better adapt to a rising temperatures and thus increase their resilience to changing climate. The report includes the following suggestions:

Forest owners who want to consider climate projections when making management decisions should try not to get overwhelmed by extreme events that may occur, the authors recommend. The recommendations for helping forests adapt to climate change can also minimize issues related to disturbances, such as from extreme events. 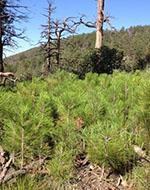 Forest owners can implement strategies so their forests will take up more carbon dioxide or otherwise reduce the amount of carbon dioxide entering the atmosphere, which helps mitigate climate change. The chapter recommends the following:

Using forests for energy production, known as bioenergy, will depend on a variety of factors including the location of the forest. When it comes to electricity production, a long distance to a processing facility or storage logistics could reduce profitability because of transportation costs. Similar issues apply for heating purposes.

The Forestry chapter of the National Climate Assessment was released in early 2014.

For more on Promote Resilience to Change: