Landscape analysis involves the assessment of features of a landscape in relation to any of a group of factors such as land use change; shifts in hydrology, forest harvest, or other disturbance; topography; historical vegetation conditions; past and potential future climate change; and other factors. A landscape may be considered as an area larger than a forest stand and smaller than a region, but for practical purposes in forest management, a landscape is a level of analysis that may be of any size, depending on the question of interest. As such, the scope of landscape analysis may encompass multiple disciplines, but the questions asked are typically at a scale that is relevant to forest management and planning. The key issue is that landscape analysis must incorporate climate change if it is to accurately represent potential future conditions in landscapes.

Landscapes bridge the gap between stands with microclimate and regions with macroclimate. The scaling of climate and its potential effects on vegetation and other landscape elements is a key problem in current landscape analysis research. Landscape analysis involves the evaluation of vegetation patterns and linkage of patterns to underlying processes as well as the interaction of pattern and process (such as vegetation patterns versus fire and climate processes). How might vegetation communities change in areas of high topographic relief in the western United States, where the influences of macro- and microclimate may be complex and potentially contradictory? How might climate change, vegetation, and disturbances such as fire, forest management, insects, disease and invasive species, interact over time to modify landscape patterns of vegetation, carbon sequestration, and biodiversity? 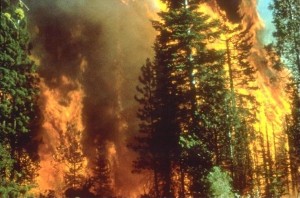 Figure 1. The area burned by wildfires in the western United States is likely to increase as the climate becomes warmer. Source: USDA Forest Service.

Wildfire frequency and duration in landscapes of the western United States have increased since the mid-1980s, resulting from subregional responses to changes in climate. The Northern Rockies have seen the greatest increases, followed by the Sierra Nevada, southern Cascade Range, and northern California and southern Oregon coast ranges (Westerling et al. 2006). In northern California, land use changes may also be involved. The Intergovernmental Panel on Climate Change’s projected warming (1.5 to 5.8°C by the end of the 21st century) is far greater than that observed (0.9°C) in recent decades in the West. These conditions compound the increased fire risk resulting from fire suppression and resulting fuel buildup during the 20th century (Keeton et al. 2007).

It should be noted that model results reflect the current status of our knowledge about a topic. Parameters are typically set and input data are prepared based on a combination of the best scientific information available and the modeling environment (e.g., technical constraints). As information increases about both the ecological systems and the pertinent elements of climate change, so will our ability to more precisely and accurately estimate projected changes to forested landscapes. Given that, the climate changes listed below are likely and relevant to landscapes of the western United States.