The circulation features that bring monsoonal moisture into the southwest United States are typically in place by late June or early July and persist through mid- to late September. The arrival of substantial monsoon moisture varies greatly from year to year. This is due to interannual variability in large-scale circulation patterns (e.g., strength and position of the expanded Bermuda high-pressure system). Atmospheric moisture values are typically high enough to support thunderstorm activity across southeast Arizona and southern New Mexico in late June or early July and gradually expand northwestward through the remainder of July. 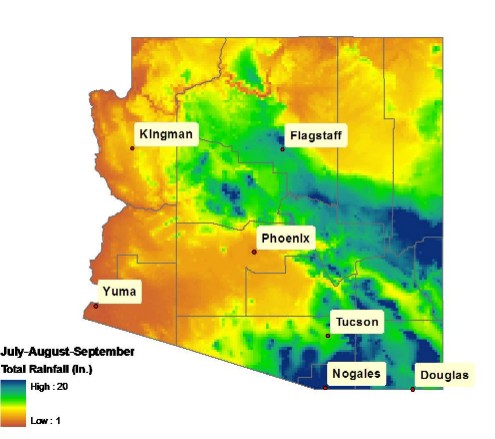 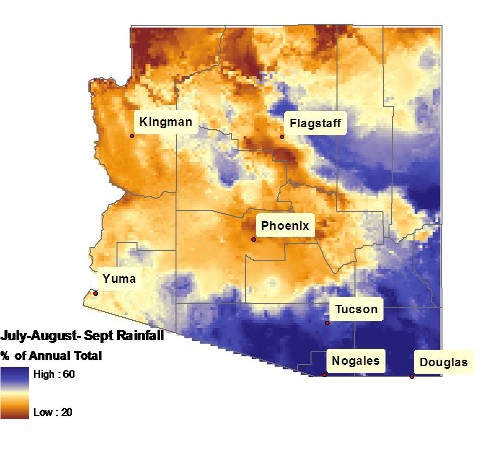 Figure 2. Percentage of annual total rainfall that occurs in July, August, and September. This map was created by interpolating climate data at point locations to a 4 km grid. Values in each grid cell represent precipitation estimates based on the interpolation model. Refer to Table 1 for actual precipitation amounts measured at observation stations across Arizona. (map created with PRISM climate data from the Spatial Climate Analysis Service, http://www.ocs.orst.edu/prism/)

Precipitation patterns across the southwest United States associated with the monsoon are strongly dictated by elevation and latitude. Given that the core of the NAMS is in Mexico, southern Arizona and New Mexico are in closer proximity to monsoon moisture and receive higher precipitation amounts during the summer. Figure 4 depicts the long-term average total precipitation for July, August, and September (JAS). Total summer precipitation amounts of 10 to 20 inches are common over the southeastern part of Arizona. These amounts decrease toward the north and west. The amount of rain falling during JAS relative to the total annual rainfall is shown as a percent in Figure 5. This shows that monsoon rainfall makes up over half (> 50%) of the total annual rainfall for portions of southern Arizona and higher elevation locations throughout the rest of the state. The maps shown in Figures 4 and 5 are created by a statistical model that interpolates between point observations of rainfall using elevation as a main model input.

The complex basin and range topography of Arizona and New Mexico exhibit a strong control on the pattern of monsoon precipitation. Monsoon season precipitation amounts are often greater at higher elevations due to the effectiveness of mountains at initiating and controlling thunderstorm development. Moist air flows can encounter mountains and be forced to rise and cool, initiating convection (orographic lifting). High-elevation areas also heat up quickly in the high summer sun. This leads them to be much warmer than the surrounding atmosphere, which also can induce convective cloud development (elevated heating). This is often why thunderstorms form first over mountain areas and then move out into valley locations. The movement of storms off of mountain areas is controlled by mid-level winds. If the winds are too weak, the storms can remain stationary on the mountain ranges where they formed.

Next: How Does the Monsoon Affect Arizona? >>

For More on The North American Monsoon System: