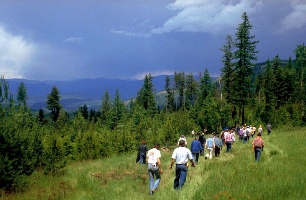 Climate naturally varies over a variety of different scales. Learn some of the aspects that influence climate variation here.

The climate varies naturally from one year to the next. Climate can also vary on much longer timescales, from decades to centuries. Climate change refers to the shift in the mean state of a particular climate parameter, such as temperature or precipitation. In more mathematical language, climate change occurs when the statistical distribution of a climate variable changes (Roesch et al. 2005).

Natural climate variability refers to the variation in climate parameters caused by nonhuman forces. There are two types of natural variability: those external and internal to the climate system. Variations in the sun, volcanic eruptions, and changes in the orbit of the Earth around the sun exert an external control on climate variability. These processes are the driving force behind changes that occur over long time periods, such as oscillations between ice ages and interglacial periods. Natural variability is also influenced by processes internal to the climate system that arise, in part, from interactions between the atmosphere and ocean, such as those occurring in the tropical Pacific Ocean during an El Niño event. These changes occur over shorter time periods, from months to decades. In any given year, natural variability may cause the climate to be different than its long-term average.

The Intergovernmental Panel on Climate Change uses the phrase “climate change” to refer to any climate change that has occurred or will occur, whether from natural variability or human activity. In popular use, however, the phrase is often synonymous with the phrase “global warming,” which is used to describe the world’s ongoing temperature rise as it relates to society’s emissions of greenhouse gases.