Big storms and floods, heat waves that hit hard and last longer are expected to continue and intensify into the future as the climate continues to warm, as noted in the National Climate Assessment’s chapter on the Northeast.

Average annual temperature in the Northeast rose by almost 2 degrees between 1895 and 2011 (Figure 1).  Meanwhile, precipitation increased by 10 percent (Figure 2).  About 5 inches more per year has been falling on average in recent years in the Northeast compared to earlier in the record. Very heavy precipitation events—those that formerly represented the top 1 percent in intensity—increased by a full 71 percent in this region. 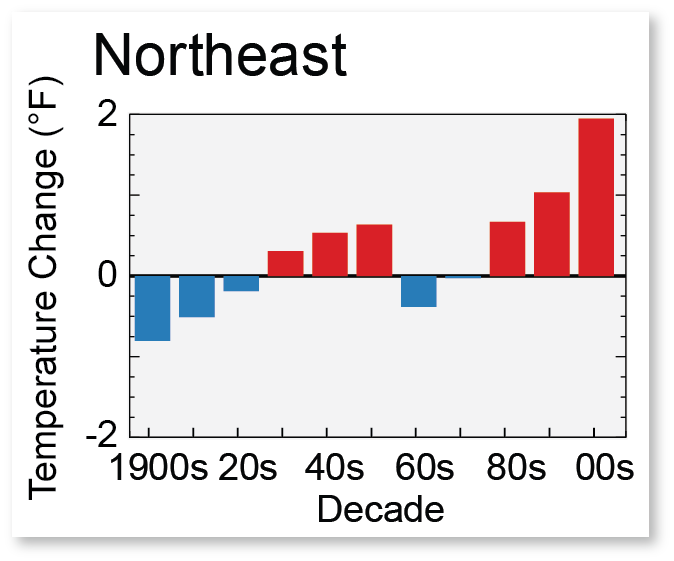 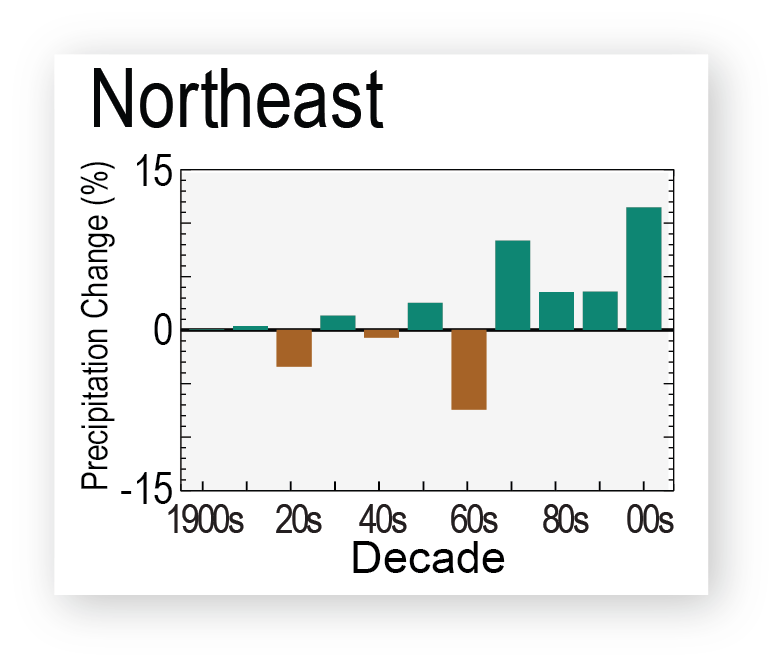 Figure 2. Average precipitation differences by decade for 1901-2012 (relative to the 1901-1960 average) for the Northeast. The far right bar in each graph is for 2001-2012. Figure Source: NOAA NCDC/CICS-NC, at http://nca2014.globalchange.gov/report/our-changing-climate/precipitation-change#tab2-images. 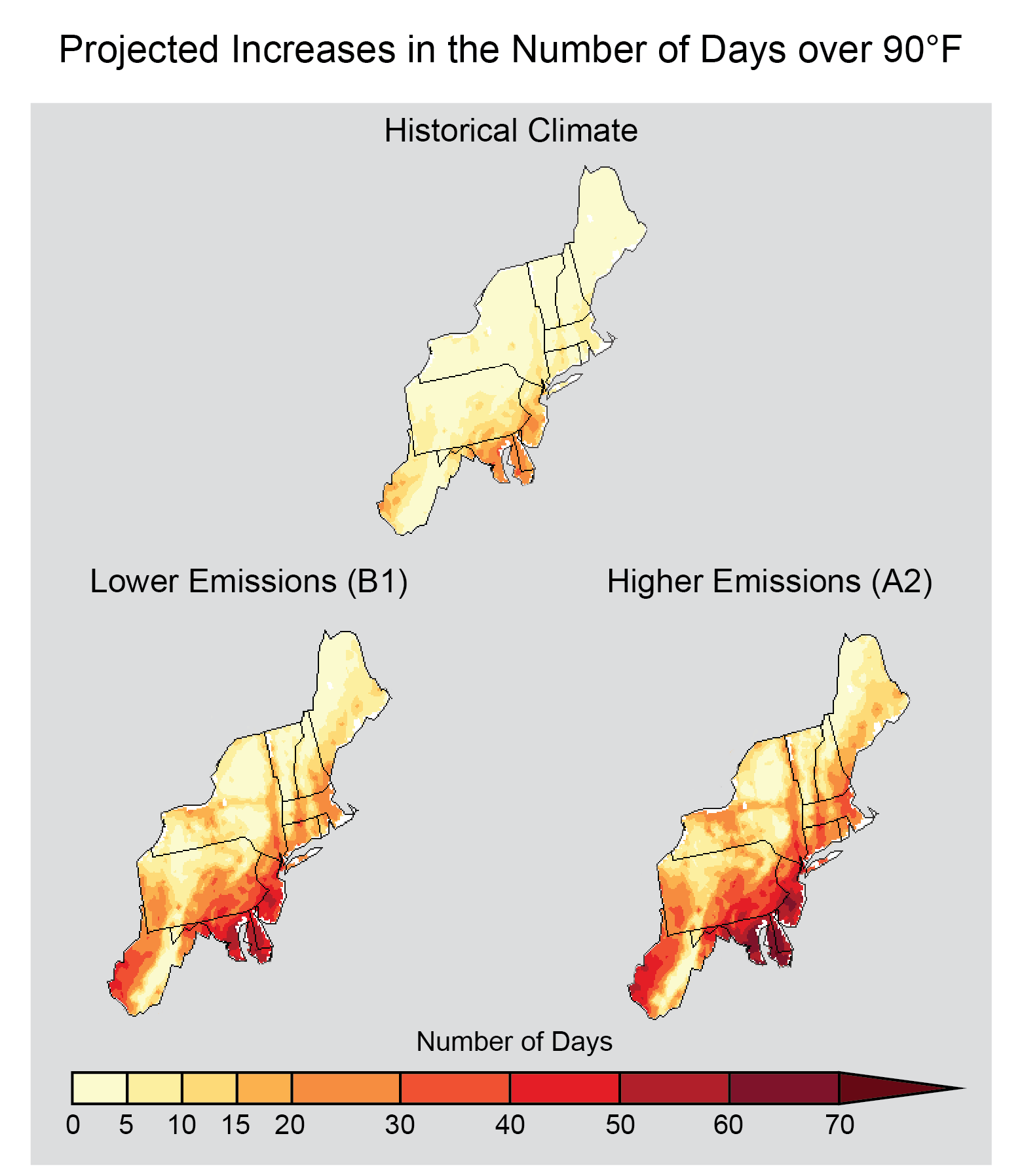 Figure 3. Projected increases in the number of days with a maximum temperature greater than 90 degrees Fahrenheit around mid-century. They compare the average for 2041-2070 to 1971-2000. The bottom figure at left assumes substantial reductions in future greenhouse gas emissions, while the bottom right figure assumes continued increases in global emissions. (Figure source: NOAA NCDC / CICS-NC).

Despite the ongoing global warming, there is evidence of an increased risk of frost and freeze damage in the Northeast over the past decade. Even an unusually warm winter can make plants susceptible to a hard freeze if cold temperatures return. There are no indications that nor’easters, major Atlantic storms off the northeast coast, are going away anytime soon.

In the Green Mountains of Vermont, northern hardwoods have moved 300 feet or more upslope in the 40 years ending in 2004, pushing into spruce-fir territory. The National Climate Assessment acknowledges that some NE trees might benefit from the longer growing seasons, it does not provide specifics. In general, trees that are more adapted to warmer temperatures, such as those also found in more southerly areas, might benefit, while trees that thrive in cold climates, including sugar maples as well as spruce and fir trees, might face more challenges in coming years.

Apple, cherry and other fruit trees, along with grape, suffered when an early spring followed by a damaging frost hit the Northeast in 2007 and 2012. Many private forests owners grow food on their land, with gardens and farms, cattle or fruit trees. Those who grow grains and vegetables in some parts of New York State are finding wet springs can reduce yields, while others face crop damage from intense rains or winds.

Warmer winters with less snow cover in some areas have led to an increase in the deer population. Additional deer can degrade forest understory vegetation in forests. Weeds in general are expected to proliferate as climate warms, some benefitting directly from higher carbon dioxide levels in the air. Most plants will benefit from the extra rainfall that has been falling in the Northeast, unless they are located in areas subject to long-term inundation that can smother roots.

Coastal areas are vulnerable to changing climate because of rising sea level (Figure 4). While global sea levels are projected to rise 1 to 4 feet by the end of the century, local land sinking is expected to make the rise effectively more extreme in many areas in the region. A rise of about 2 feet in sea level would more than triple the frequency of dangerous coastal flooding throughout much of the Northeast. Coastal forests would similarly be vulnerable to these changes. 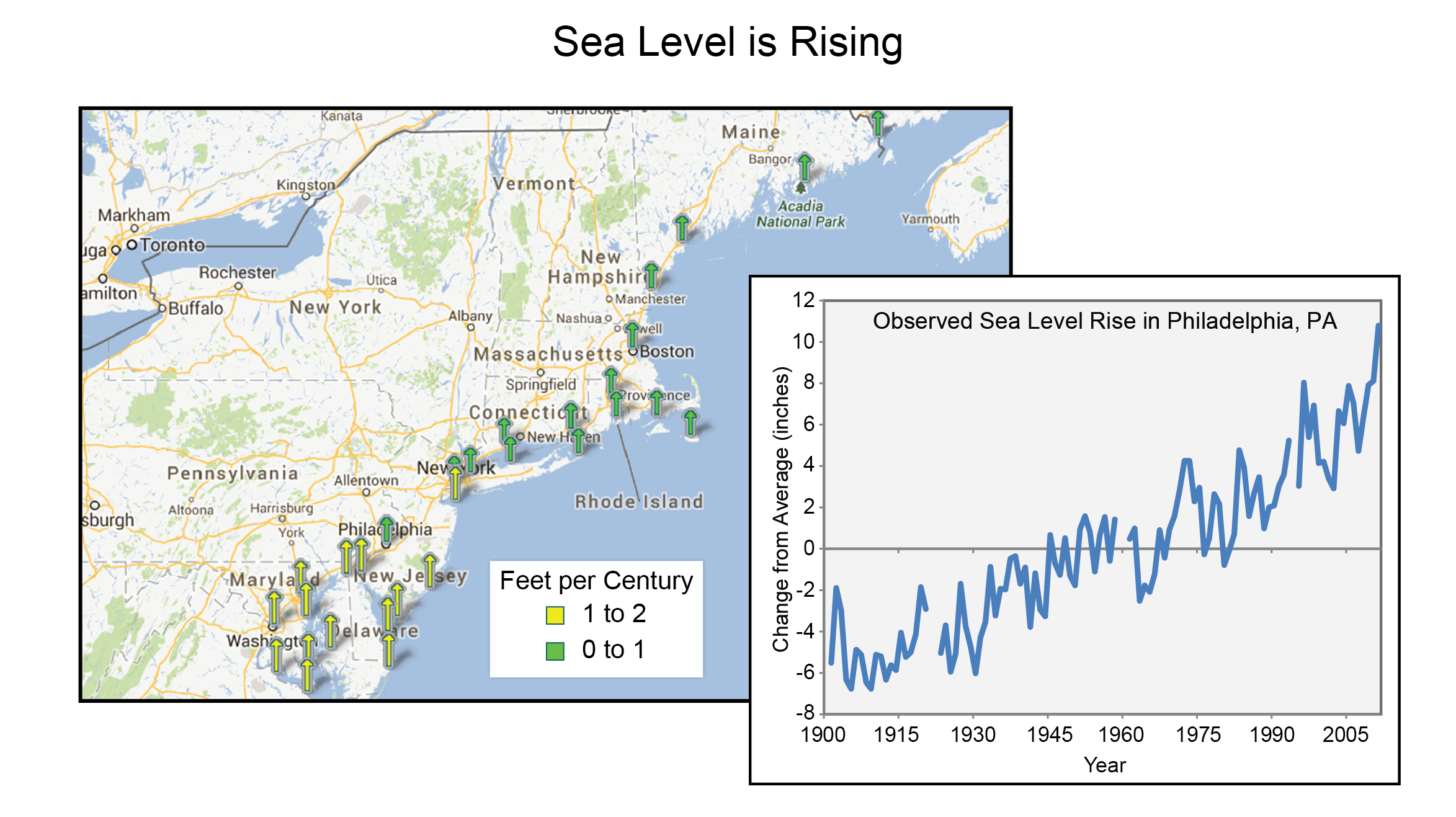 For more insights on how climate change is affecting and is projected to affect the Northeast, see http://nca2014.globalchange.gov/report/regions/northeast.