With roughly half of the landscape covered in forest, the Northwest has an extensive industry in timber and bioenergy. In addition, snowmelt helps water fruit trees in the interior, helping to put the Northwest at the top of tree fruit production globally. All of these industries could be affected by the ongoing climate change, as higher temperatures and variable precipitation makes forests more susceptible to insect outbreaks and wildfire, and earlier snowmelt possibly affects fruit production.

The Northeast warmed by about 1.3 degrees Fahrenheit overall between 1895 and 2011 (Figure 1). The extent of the future warming is projected to range from about 3 degrees to nearly 10 degrees Fahrenheit by the end of the century, compared to the end of the 20th Century, with the extent largely dependent on the amount of greenhouse gases released during the intervening time frame. 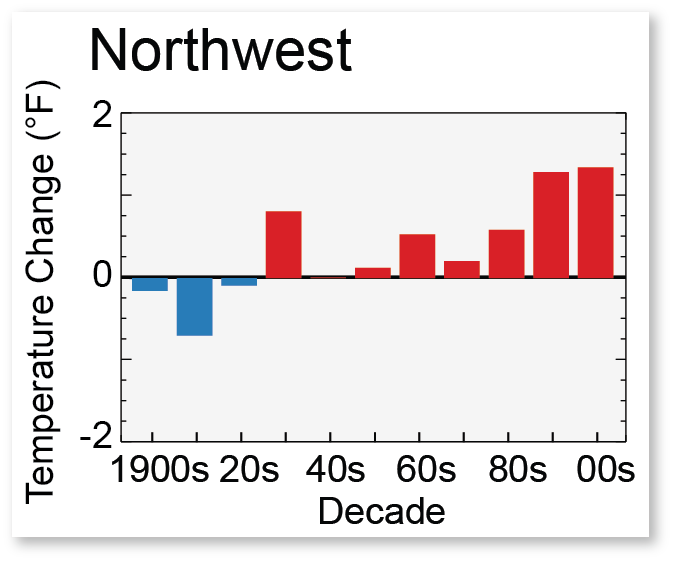 Precipitation has been variable across the region, with changes relatively small compared to natural variability, but generally increasing overall (Figure 2). Models are inconsistent regarding future precipitation, but the number of days with more than 1 inch of precipitation is expected to increase by about 13 percent by mid-century when averaged across the region. On the other hand, most climate models agree that summer rainfall could decrease—perhaps by nearly a third—by the end of the century. 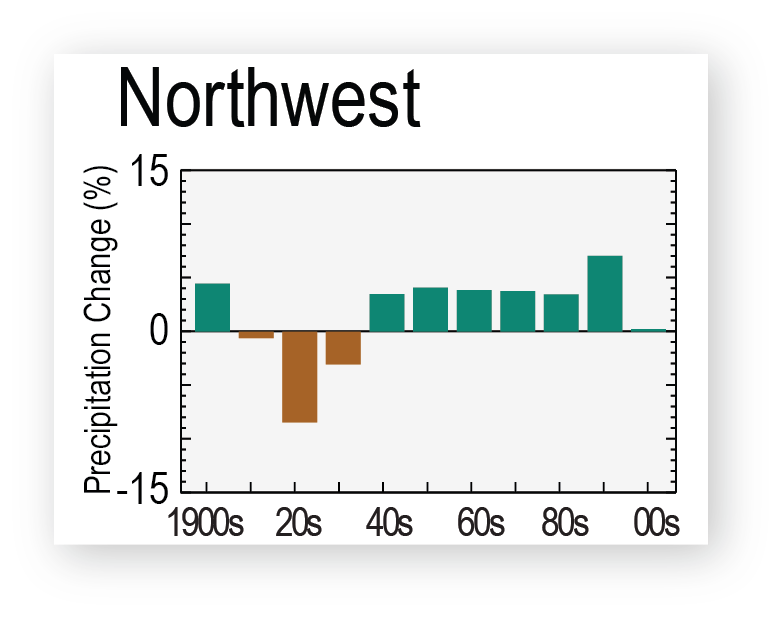 Thanks to ongoing tectonic uplift—with geological forces causing the land to rise—the Northwest likely faces the least threat from sea level rise than other coastal regions in the country. However, an earthquake could reverse this protection. Also, some Puget Sound locations have been sinking, which makes any rises in sea level even more dramatic.

Early snowmelt may be the factor to watch when it comes to water availability, given that projected precipitation changes are relatively small compared to natural variability, and sea level rise is projected to be slower than the global average across much of the region, By 2050, snowmelt is projected to occur up to a month earlier than the 20th Century average. This could lead to substantially lower summer river levels in areas, such as the North Cascade. Basins with reliable groundwater are likely to be less subject to climate change challenges, although early snowmelt has been linked to a greater incidence of large wildfires.

Wildfires occur naturally in many northwestern forests, such as the Ponderosa pine and other dry forests found on the Eastern Cascades. Warmer and drier conditions that have been linked to early snowmelt have helped increase the number and extent of large fires throughout the West. This trend is expected to continue, so forest owners should be sure to follow FireWise practices around homes, and take actions if possible to undertake canopy thinning to reduce the hazard of high-severity fire in dry forests.

In forests adapted to infrequent but high-severity fires, such as the western Cascades, Olympics and some alpine forests, thinning treatments are likely to be ineffective. Subalpine and alpine ecosystems in particular may be unsustainable in the long run; many of them may end up converting to other vegetation types by the 2080s.

In forest types where thinning can be an effective tool, this practice can also help reduce mortality from insect outbreaks. As it is, drought stress and higher temperatures are increasing mortality from mountain pine beetles in dry Northwest forests, and this trend is expected to continue through mid-century (Figure 3). On a positive note, temperatures may rise beyond the beetles’ optimum temperature in the long run. If beetles don’t adapt to the higher temperatures, their range could decline by roughly half by about the end of the century. Figure 3 shows estimates in changes in survival based on cold tolerance, seasonal heat accumulation, and spring rainfall. 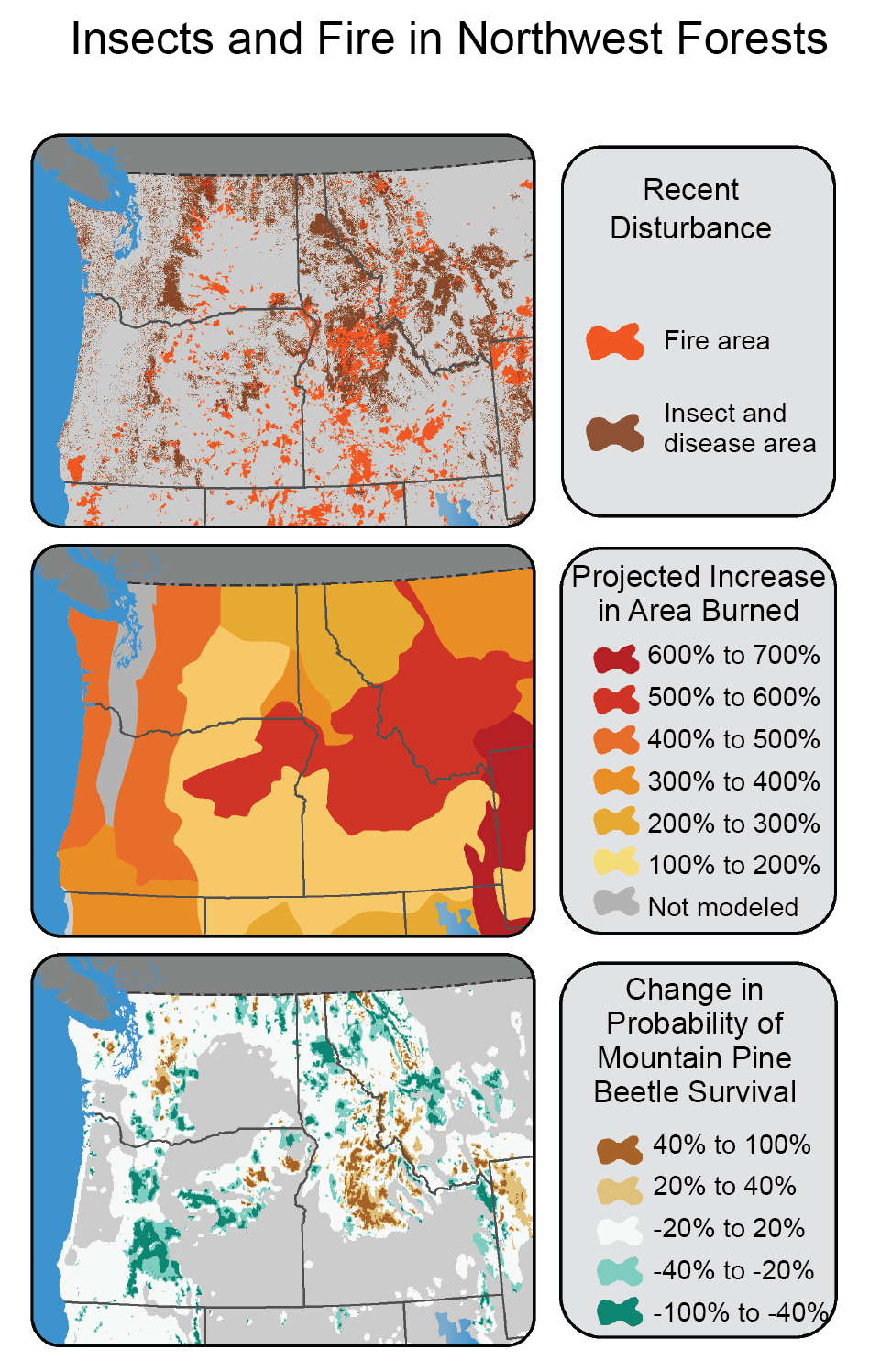 Figure 3. Recently burned (1984 to 2008) or affected by insects or disease (1997 to 2008). Insects and fire have cumulatively affected large areas of the Northwest and are projected to be the dominant drivers of forest change in the near future. Map at top shows areas Map in middle indicates the increases in area burned projected to result from the regional temperature and precipitation changes associated with a 2.2 degree Fahrenheit global warming. Projected changes (bottom map) in the probability of climatic suitability for mountain pine beetles for the period 2001 to 2030 (relative to 1961 to 1990), where brown indicates areas where pine beetles are projected to increase and green indicates areas where pine beetles are expected to decrease in the future.

For more insights on how climate change is affecting and is projected to affect the Northwest, see http://nca2014.globalchange.gov/report/regions/northwest.