While the biological processes of photosynthesis, respiration, and decomposition are similar for all forests, their relative importance differs by forest type and location. Some forests grow more rapidly, but dead trees in fast-growing forests also decompose more rapidly. In addition, disturbances vary regionally; for example, fire disturbance is more common in the western United States and hurricanes more common in the East. Forests are managed in different ways with varying harvest intervals and regeneration practices that will influence the optimum strategy for storing more carbon. Each forest has a different potential to store carbon. For example, this potential is particularly high in the Pacific Northwest where forests are relatively productive, trees live a long time, decomposition is relatively slow, and fires are infrequent. The differences between forests must, therefore, be taken into consideration when determining how they should be managed to store carbon.

Forests have other influences on climate besides that of carbon; these are known as biophysical effects (Figure 1) and include the reflection of solar radiation and transpiration of water vapor. Each of these factors can have significant effects on the rates of photosynthesis, decomposition, and respiration in forests, which can alter how much carbon can potentially be stored. Trees are dark and absorb more radiation than other types of land cover, such as crops or snow-covered tundra. Therefore, converting non-forested land to forest can warm the land and air. Evergreen trees absorb much more energy than deciduous trees in the winter, and burned forests absorb more than unburned forests, so species and disturbance can also alter the energy absorbed by forests. In addition, transpiration from forests may have a cooling effect by contributing to the formation of clouds that reflect sunlight. 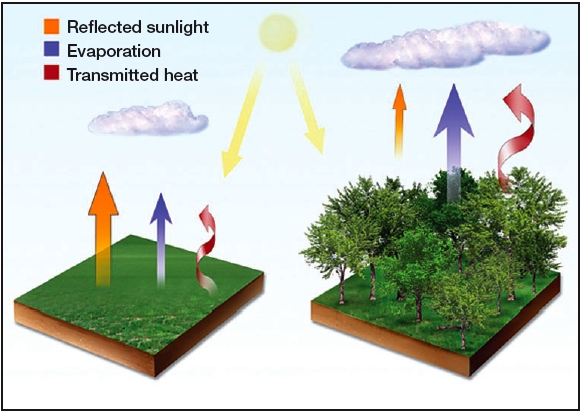