Plant tissue (including wood) is composed of about half carbon, all of which comes from carbon dioxide (CO2) in the atmosphere. Photosynthesis rates tend to increase as CO2 levels rise, leading to an increase in dry weight, or biomass, of plants grown under elevated carbon dioxide levels. 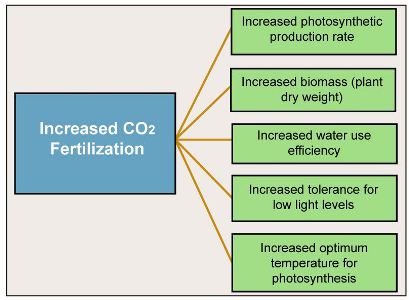 An important consideration in relation to climate change is that carbon dioxide fertilization raises the optimum temperature for photosynthesis (e.g., Norby et al. 1999). It also increases the water use efficiency of plants. However, other factors, such as deficient nitrogen or absence of moisture, can limit plant response even with increased CO2 levels.

Various plant species and genotypes express differences in their degree of responses to CO2 fertilization. Although most experiments have considered the effect of carbon dioxide fertilization on individual species and not interactions among species, woody species, such as trees and shrubs, appear to be more responsive to carbon dioxide fertilization than some grasses and crops. For instance, forest ecosystems tend to have a more pronounced response to CO2 fertilization than grassland ecosystems, based on a comparison of 18 FACE experiments by Nowak and colleagues (2004).

Woody plant biomass in southwestern forests and grasslands has increased in the past century, primarily due to fire suppression. Arguably, one should consider that carbon dioxide fertilization in recent decades could be contributing to the biomass increase. Response to CO2 fertilization may influence competition between species, including woody species versus grasses, and native grasses versus invasive species (Smith et al. 2000). Plants using the C4 photosynthetic pathway already boost their internal concentration of CO2, so they tend to be less affected by external increases than C3 plants. Therefore, C3 plants, which include all trees and shrubs as well as some cool-season invasive grasses like bromes (Bromus spp.) and cheatgrass (Bromus tectorum), may be more responsive to CO2 fertilization than C4 plants, which include most warm-season grasses and invasives, like lovegrass (Eragrostis spp.) and buffelgrass (Pennisetum ciliare).

Meanwhile, desert ecosystems exhibited a greater response than both forests and grasslands in the FACE experiments after adjustments for differences in precipitation. Carbon dioxide fertilization increases plant water use efficiency, which may help explain why the desert ecosystems responded more dramatically than other ecosystems. In comparing all the ecosystems, Nowak and colleagues (2004) found that net primary productivity rose by an average of 12% in ecosystems exposed to elevated levels of CO2 compared to controls (typically 550 parts per million compared to ambient levels of 380 parts per million or below, depending on the year of the experiment).

There is some evidence that plants grown under conditions of carbon dioxide fertilization may increase the production of chemical compounds (phenols) that make them more resistant to some insects. On the other hand, it has been hypothesized that the increased growth will also promote herbivory, in part because the concentration of nitrogen in leaves tends to drop. However, declines observed among potted seedlings are not always apparent in field-grown trees (Norby et al. 1999).

Researchers continue to test whether the increased photosynthesis is a short-lived response or an ongoing one. Most experiments last only one or two years, so this is difficult to assess. There is no clear evidence that the response is short-lived for trees except when root containers (pots) limit their potential for root expansion (Curtis and Wang 1998). In a 15-year experiment in Maricopa, Arizona, the wood of sour orange(Citrus aurantium) trees exposed to CO2 levels about 300 parts per million higher than ambient levels initially yielded nearly three times as much biomass as control trees, with the rate slowing to less than double after a few years (Figure 2). 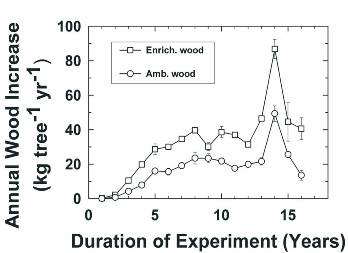 Figure 2. Annual increments of sour orange wood versus duration of exposure to CO2 enrichment. The wood data are based on monthly trunk circumference measurements converted to bio-volume using an allometric relationship established during years 2 and 3 of the experiment (Kimball and Idso 2005). Volume was converted to biomass using density measurements from pruned branches.