The hot, dry landscapes that define the Southwest are projected to get hotter and drier in decades to come, bringing with it threats to forests and tree crops from wildfire, lack of water, and reduction in the chill hours that keep fruit trees productive.

The Southwest is heating up more rapidly than most other regions in the country (Figure 1). The period since 1950 has been hotter than any comparably long period in at least 600 years. The decade that ended in 2010 was the warmest in the 110-year instrumental record, with temperatures about 2 degrees Fahrenheit warmer than historic averages. The year 2014 registered as the hottest year on record in both Tucson and Phoenix. The region has seen more heat waves and fewer cold air outbreaks. 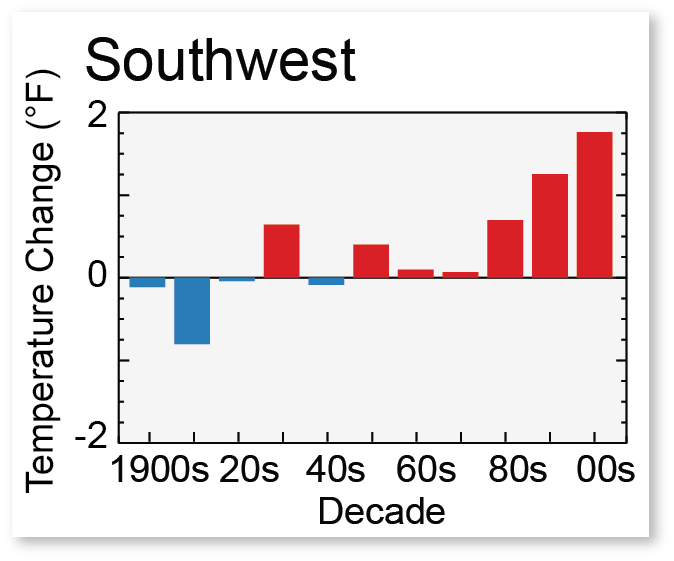 Annual temperatures in the region are projected to rise on average by another 2½ to 5½ degrees Fahrenheit by roughly mid-century, with the potential for dropping the high end by a degree if society finds way to reduce the emissions of greenhouse gases such as carbon dioxide. The benefits of the emissions reduction would make the biggest difference in end-of-the-century conditions; the annual average temperature increase by then could be nearly 10 degrees by then, or roughly half that with reductions in emissions. Unlike some other regions, which face greatest warming in winter, greater warming in the Southwest is likely to occur in fall and summer.

Precipitation has remained variable in the region (Figure 2). Precipitation projections are far less certain than temperature projections, but the higher temperatures are almost certain to increase the risk of drought. Recent drought combined with hotter temperatures has increased both the extent of forest insect outbreaks, particularly bark beetles, and the amount of area in the Southwest burned by large wildfires. The earlier snowmelt that has been occurring in the Southwest also has been linked to an increase in large wildfires. 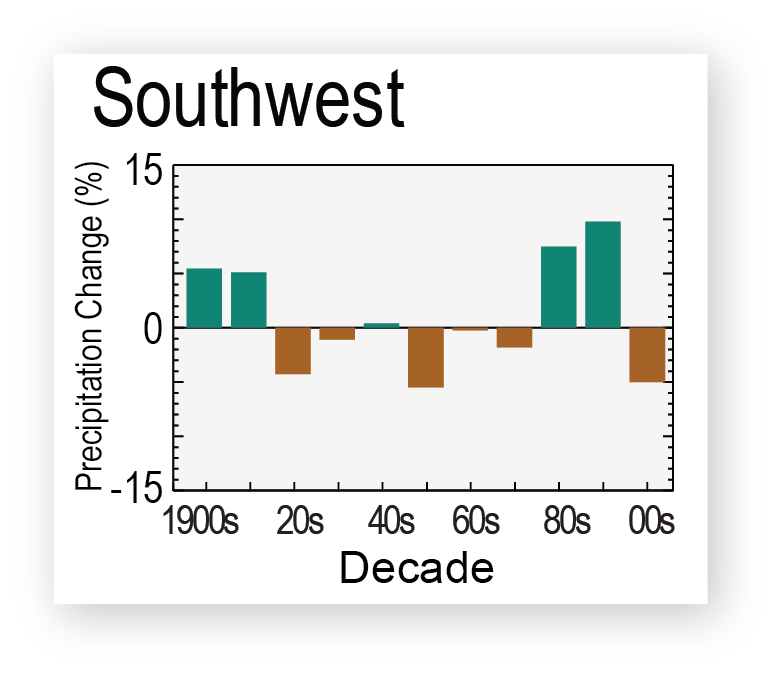 Besides affecting wildfire hazard, earlier snowmelt means the water trickling into rivers to become streamflow is arriving earlier. Also, less precipitation has fallen as snow in much of the Southwest over the past 50 years. These factors, along with the higher evaporation rates that come with higher temperatures, add challenges for the region’s struggling rivers, which are already overburdened in a region that continues to grow in population. During the hot, mostly dry decade from 2001 to 2010, water flow in the Sacramento-San Joaquin, the Colorado, the Rio Grande, and in the Great Basin were between 5 and 37 percent lower than their 20th century averages.

Conversely, some of the region faces risks from flooding and sea level rise. Precipitation is projected to arrive in more intense events. The higher evaporation rates over oceans cause the air to carry more moisture overall, sometimes in the form of “atmospheric rivers” that can cause deluges in California’s coastal ranges. These airborne rivers can carry their heavy loads of moisture as far inland as Utah and New Mexico. Additional moisture in tropical storms also means hurricane remnants can pour more water into the Southwest during late summer and fall. When this heavy rainfall or floodwater strikes areas left barren because of drought or wildfire, more soil erosion results.

More extensive erosion is also occurring along the coast as sea level rises. Sea level has risen roughly 6½ to 8 inches along the California coast in the last century, although it has been relatively stable since about 1980. Future rises are expected to be accelerated, with increased likelihood of floods in extended high tide periods that can reach farther inland.

Tree crops in the Southwest face many challenges, from potential reductions in water supply to reduced chilling periods, as well as rapid changes in the seasonal timing of flowering and fruiting. California produces about 95 percent of U.S. apricots, almonds, figs, kiwis, raisins, olives, cling peaches, dried plums, persimmons, pistachios, and walnuts, in addition to other high-value crops. These and other agricultural products will face conditions that could reduce yields or value.

Species may need to shift northward to reflect the changing climate that supports them. This is particularly true for fruit trees that require a certain number of “chill hours” between 32 and 45 degrees Fahrenheit for ideal productivity. The ongoing warming could push many varieties beyond their optimum temperatures, particularly after 2050.

All of the Southwest’s trees, meanwhile, will be vulnerable to increases in wildfire and insect infestations. Higher temperatures and lack of water, particularly in the months leading up to summer, prime many southwestern forests for wildfire. Meanwhile, longer growing seasons and warmer winters sometimes permit tree-killing insects such as bark beetles to have more than one breeding season in a year.

From 1984 to 2008, wildfire and bark beetles killed trees across 20 percent of forests in Arizona and New Mexico. In some cases, certain species died preferentially. For instance, bark beetles took down many pinyon trees across the Southwest, but left generally untouched their companion tree, juniper. Similarly, many trees survive wildfires, particularly if they pass only across the surface to burn grasses and small seedlings. In recent years, however, some large wildfires reached into the crowns of even large trees, virtually charred entire swaths of forests as large as 5,000 acres, leaving charcoal-blackened remnants of trees standing dead.

Fire models generally project increased wildfire hazard as climate change continues. Burned area could double in the southern Rockies, and increase by up to 74 percent in California, based on results from numerous models. Conifer forests of southern California and the sky-island forests on mountain peaks throughout southern Arizona are among the most vulnerable to potential vegetation shifts due to climate change coupled with the increase in wildfires that are projected.

In some dry western forests, such as Ponderosa pine forests, wildfire hazard can be tamed by thinning out of relatively young trees that otherwise can carry fire into the canopies of the tallest trees. Prescribed burning upon thinning, or regularly in forests that have not reached an overly dense state from too many young trees, can further make forests more resilient to coming changes.

When thinning, keep in mind that retaining some large trees can help forests adapt to climate change. They also help dampen the trajectories for future change by storing carbon that was plucked out of the air as carbon dioxide, one of the greenhouse gases blamed most for the ongoing climate change.

For more insights on how climate change is affecting and is projected to affect the Southwest, see http://nca2014.globalchange.gov/node/5762.