Large-scale infestations of bark beetle can create havoc on landscapes, costing landowners thousands of dollars in damage and lost revenue. Based on historical records, bark beetle outbreaks are relatively short lived and are rarely sustained for long periods of time. However, high tree densities and expected changes in drought conditions, especially for the southwestern United States, may also alter the severity and extent of bark beetle outbreaks in many areas. The best way to avoid having trees attacked by bark beetles is to take preventive measures both within tree stands and with freshly cut wood products, such as log decks and firewood.

When treating stands of trees for bark beetle, it is important to remember that freshly cut wood creates an attractant for beetle populations. The key for treating stands is to make sure freshly cut wood is kept a good distance away from trees that will be remaining on the site to prevent further infestations. The following recommendations can help reduce the risks of large-scale bark beetle outbreaks (DeGomez and Young 2009):

Uninfested trees can be protected from beetle attacks by using insecticide or chemical treatments. Please be aware that spraying large trees is generally not a practice homeowners can do themselves. For tips on pesticides and how to locate a certified pesticide applicator, visit http://www.pestworld.org/find-a-pest-control-professional/tips-on-finding-a-pro/.

Figure 1. From left, a pitch tube and boring dust on the trunk of a tree. 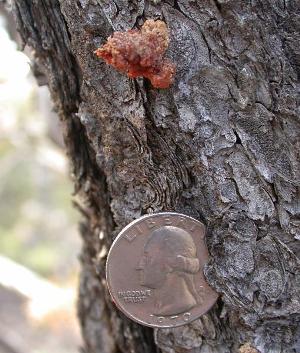 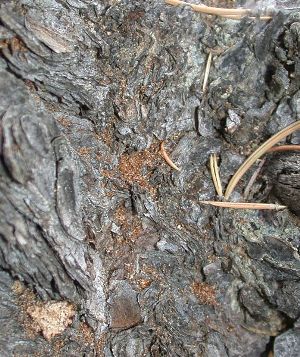 Pesticide treatments are a protective measure only and will not kill beetles once they enter the tree. Firewood should not be treated with insecticides. Currently, no insecticides are registered for use in control of insects that infest firewood. Therefore, in addition to it being illegal to spray firewood, the sprayed firewood may release toxic fumes when burned.

Often, property owners will have several trees that have significant value on their landscape. These trees may be prized for their size and location. Additional care must be given to help prevent infestations. For trees already showing signs of infestation, the only direct control method is the removal of infested trees. The following recommendations are given for the care of individual trees (DeGomez 2004): 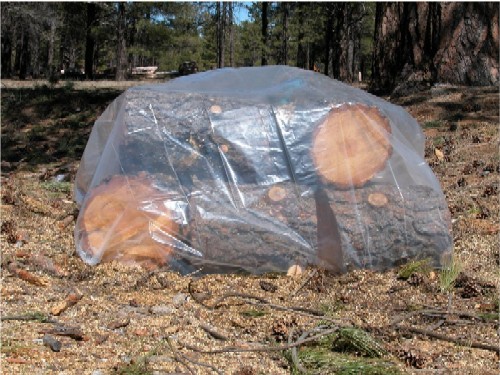 This process creates a solar oven. Much depends on the amount of solar energy trapped and the height or thickness of the pile. This technique is usually only effective during the hottest months of the year, April through September. In areas where prolonged cloudy or cool temperatures persist, this technique may be ineffective. The high temperatures produced will kill bark beetles inside the wood. Mortality of bark beetles in the logs at the top of the pile may exceed 50 percent, but those in lower logs may not be affected.

As wood dries, it loses water and weight and becomes less desirable as a host for bark beetles. Speed the drying process as follows (DeGomez and Loomis 2005):

DeGomez, T. and B. Loomis. 2005. Firewood and bark beetles in the Southwest. University of Arizona, College of Agriculture and Life Sciences Bulletin AZ1370. Tucson, Arizona.