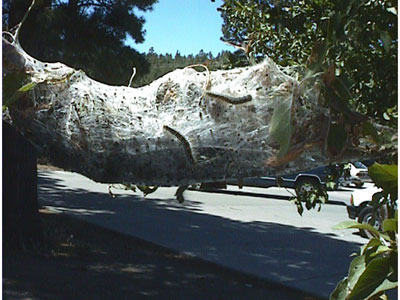 Fig. 1. The “tent” of the tent caterpillar can be a foot or more long. Photo: Tom DeGomez, University of Arizona.

This insect’s most obvious sign is a silken “tent,” or mat in the case of the forest tent caterpillar, that can be seen among the branches of a tree (Figure 1). These tents can be a foot or more long, and they can be used by dozens of larvae. The larvae use the tent for resting and for protection from predators and weather extremes. A larva leaves the tent daily to feed on the tree’s foliage for four to six weeks before finding a protected place suitable for forming a cocoon. After two to three weeks, the insect emerges as an adult (moth) and no longer feeds on tree foliage. After mating, the female moth finds a suitable host tree and deposits egg masses of 150 to 300 eggs, often in a band around a twig (Figure 2). The eggs hatch shortly thereafter, but the larvae remain dormant in the eggs until the following spring. There is one generation per year. 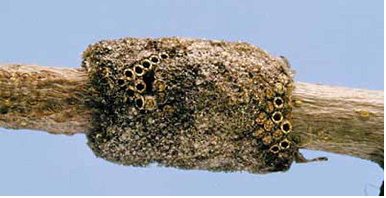 There are instances when tent caterpillar populations reach nuisance levels. Mature larvae (Figure 3) often crawl to seek protected places to form their cocoons. When they do this in large numbers, people typically perceive a severe infestation, as the larvae travel across roads and walkways and form cocoons on protected areas, even on or within buildings when they find a suitable entry point.

In some cases, patches of trees and forested areas can be defoliated, and defoliation may occur several years in a row. Most trees can survive the loss of foliage and will leaf out again in the summer with a tougher, less palatable leaf. Trees in poor condition that are stressed by disease or drought may be more susceptible to mortality. While significant economic impacts in forest or fruit production are not widely reported, eastern tent caterpillars have been associated with Mare Reproductive Loss Syndrome in Kentucky. 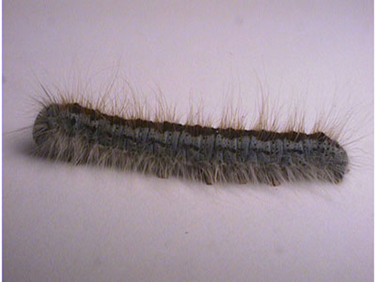 Given time, nuisance-level populations will decrease due to a variety of natural causes. Heavy defoliation due to overpopulation leads, in turn, to starvation, causing the population’s numbers to decrease. Weather conditions also play a role in population control: freezing weather occurring shortly after the eggs hatch kills large numbers of tent caterpillars, as do high spring temperatures. Tent caterpillars are attacked by parasites, insect predators, and bacterial and viral diseases. Moreover, several species of songbirds and some bats and small mammals eat the eggs, larvae, and/or moths. Although vertebrate predators are important population regulators under normal population conditions, their capacity to affect tent caterpillar populations can be quickly overwhelmed during heavy infestations.

In smaller landscape settings, mechanical control includes pruning out and destroying the tents in the early spring when caterpillar activity begins, preferably in the early morning when many caterpillars are still in the tents. Egg masses can be pruned during the winter when they are visible, especially on smaller trees.

Insecticidal control includes the use of Bacillus thuringiensis (Bt), as well as other botanical or synthetic insecticides. Bt is a naturally occurring bacterial organism that kills the larvae of moths and butterflies. It is available as an insecticide under several brand names. It is nontoxic to humans and other nontarget organisms, such as bees and fish. Experts recommend applying chemicals on budding foliage in the early spring when caterpillar activity begins so that small, early-stage larvae consume the insecticide while feeding. In events where large populations are hard to control, the use of insecticides is not necessarily more effective than natural causes and the use of the mechanical control methods mentioned above. 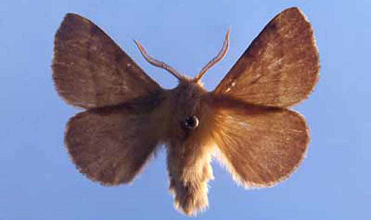 Tent caterpillars (Figure 4) are not gypsy moths (Lymantria dispar), although they may be similar in appearance. In many parts of the country, fall webworms (Hyphantria spp.) also are present. These create very similar tents in broadleaf trees but are active in the late summer and early fall. Because fall webworms defoliate trees late in the season, they have less potential to cause serious damage. The concerns and control methods related to tent caterpillars, with the exception of the timing of application, also apply to fall webworms.