The gypsy moth (Lymantria dispar) (Fig. 1) was intentionally introduced from Europe to the northeastern United States in 1869. It has spread west and south in the United States as well as north into Canada, where it has reached its northern limit due, in part, to adverse climatic conditions. Currently, the gypsy moth is confined to areas east of Lake Superior, although isolated infestations have been treated in some states in the western United States. 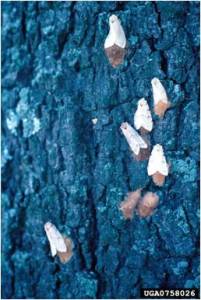 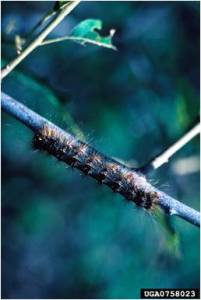 A model of the insect’s seasonality was used to predict the probability of its establishment in Canada (Régnière et al. 2009). The model predicted that this species, which is highly polyphagous (i.e., has many host plants) (Fig. 2), will threaten considerable hardwood forest resources as climate change allows it to expand further north and west into Canada. It is estimated that the proportion of Canada’s deciduous forests at risk of damage by gypsy moth will grow from the current 15 percent to more than 75 percent by 2050. Much of the management strategy to reduce this risk involves monitoring and control in the area west of Lake Superior, which has been a geographical barrier to the insect’s northern spread route between Ontario and Manitoba. Such efforts, in conjunction with the “Slow the Spread” program in the midwestern United States, may help to prevent gypsy moth spread from the south. 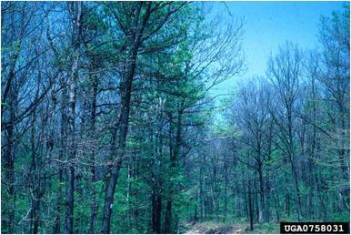 Figure 2. Defoliation of oaks and other trees in Pennsylvania from gypsy moth activity. Photo by William Ciesla, courtesy of forestryimages.org.