The hydrologic cycle, or water cycle (Fig. 1), explains how water is moved from the earth to the atmosphere. Water moves to the atmosphere as water vapor through evaporation and transpiration. It condenses and falls to the earth’s surface as precipitation. Water then either travels across land surfaces in watersheds or channels or infiltrates to underground aquifers where it travels laterally underground, occassionally surfacing as springs or lower elevation stream flow. This cycle is driven by the sun, which provides energy and gravity to keep water moving. 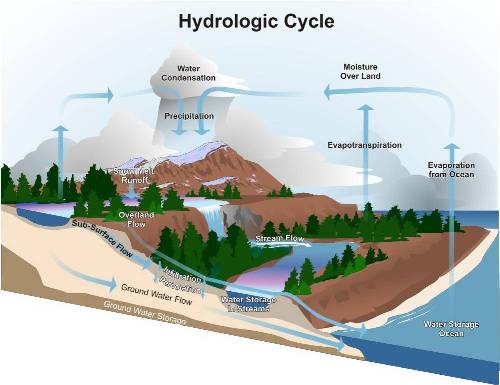 The hydrologic cycle is the movement of water between land, streams, oceans, and the atmosphere. THis cycle involves many numerous pathways and major storage units such as soils, aquifers, oceans, atmosphere and plants. Water is not created nor destroyed. Illustration by D. Cantrell.

Precipitation also varies spatially both across the landscape and with elevation. The amount of precipitation that falls is measured through the use of a rain gauge, which provide a single point of measurement. A network of rain gauges can be used to interpret the volume of precipitation over a region.

If the rate of precipitation exceeds the capacity of the ground to absorb it, the excess rainfall becomes runoff. Runoff traveling across the surface of the landscape is termed overland flow. Overland flow may be absorbed into soils further downslope through the process of infiltration, or it may reach the channel network as surface flow. Water that seeps, or infiltrates, through sediment in channel may contribute to groundwater recharge.

Evaporation is the return of water to the atmosphere from surfaces such as streams, lakes, puddles, ponds, and soil pores. Plants contribute water vapor to the atmosphere through the process of transpiration. The combined contributions of these processes is terms evapotranspiration. The rates of both evaporation and transpiration depend on temperature and humidity, which are influenced by longitude and latitude, elevation, and proximity to the ocean. In addition, local climate factors such as temperature and wind speed affect both evaporation and transpiration. Transpiration also varies by species with the amount and kind of vegetation, as well as with the growing season.

Related to The Hydrologic Cycle: