The southwestern United States receives most of its annual precipitation in two distinct seasons, winter and summer. Winter precipitation is produced by large-scale surface low-pressure systems that traverse the southwest, drawing in moisture from the Pacific Ocean and producing widespread rain and snow (Figure 1a). Energy to fuel these large-scale low-pressure systems comes from the upper level (20,000 ft) midlatitude and subtropical jet streams that are typically active in proximity to the southwest United States during the winter (Woodhouse 1997). Occasionally, energy will break away from these main jet streams and move slowly across the southwest as circulation features called “cutoff” low pressure systems.

Figure 1. Average air flow patterns and moisture air mass boundaries for (a) winter and (b) summer. 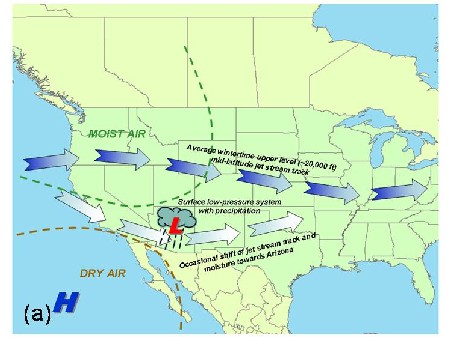 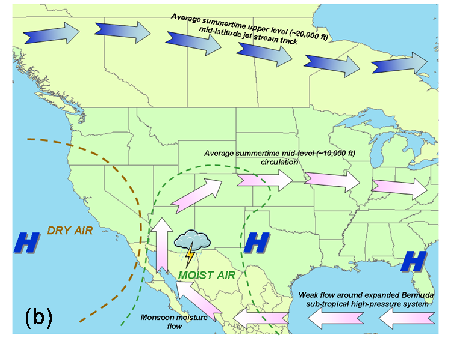 Summer precipitation in the southwest is the result of very different atmospheric features. The midlatitude jet stream retreats far north during the summer, and the subtropical jet stream is replaced by a large high-pressure system anchored over the eastern Pacific Ocean (Figure 1b). The mechanism that produces summer precipitation is not associated with large-scale jet streams or strong low-pressure systems, but from convective thunderstorms that arise through the combination of solar heating and moisture. Sunshine and solar heating are plentiful across Arizona during the spring and summer, but moisture levels adequate for thunderstorm development are not always present. A subtle change in circulation patterns during the summer opens up a flow of moisture from the south that dramatically increases convective thunderstorm activity across the state. That subtle change in circulation patterns is the North American Monsoon.

How does the monsoon work?

For more on The North American Monsoon System: