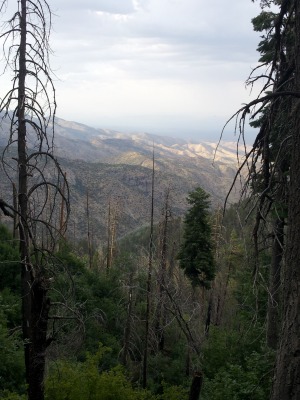 If you own wooded land, it is helpful to understand factors that make some parts of your forest susceptible to fire, and what you can do about it.

The US wildfire season of 2012 burned more than 9 million acres, making it another extraordinary year for big, out-of-control fires. Forest stands with high densities of small trees face a greater risk of bark beetle infestation, according to a 2002 report by the USDA Forest Service and Western Forestry Leadership Coalition.

An overabundance of small trees also can make a stand more susceptible to drought due to competition for limited resources, including water. In turn, water-stressed trees are more likely to succumb to bark beetle attacks, drought mortality, and wildfire.

The makings of a wildfire

When temperatures rise, whether during the seasonal shift into summer or over the years because of changing climate, the fire hazard worsens. Fires need heat, oxygen, and fuel to burn. Oxygen is generally available, except in waterlogged soils. Heat evaporates water from trees, grasses, soil, and the layer of ground cover.

When temperatures are high and weather is dry, conditions are ripe for wildfires to spread. Weather affects fire behavior in other ways, too. Winds drive a wildfire’s velocity: its speed across the landscape and the direction of its spread. Humidity—or lack of it—affects a fire’s severity.

The lay of the land, or its topography, is another major influence on fire behavior. For instance, fires move faster uphill than downhill. 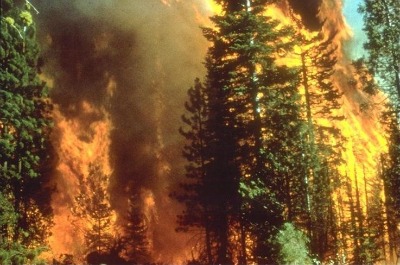 The role of ‘fuel’

Where trees are densely packed, wildfires are likely to burn bigger and hotter. A lightning bolt strike or a careless camper can provide the ignition, as long as there is fuel for the fire.

Fuel—any part of a forest that is combustible, from shrubs and organic material on the forest floor to standing live and dead trees—is the third key factor in what firefighters call fire behavior. Fuel largely dictates the intensity of the fire and whether it damages or merely sweeps through the forest understory.

Unnaturally heavy fuel loads can intensify a surface fire or feed a more damaging crown fire that sweeps through the treetops.

Of the three factors in the fire behavior triangle, fuel is the only one that lends itself to manipulation by forest owners. Mechanical treatments to reduce fuel loads in a stand of trees are commonly known as thinning.