Timber production is the primary source of revenue from private timberlands in the United States, Europe, and Oceania. Sawlogs are the most valuable product, but it takes decades to grow these larger diameter trees. Thinnings of smaller trees that can be utilized to make pulp and paper products or for energy are typically harvested to generate revenue while the remaining trees are growing larger, to shift more resources to the remaining trees, and to remove some of the mortality from the stand. In the United States, about half the annual harvested volume is pulp logs or energy logs while the rest is the higher value sawlogs. Across both the United States and Europe, about 60 percent of the annual forest growth is harvested for use as products. The impact of climate change on timber production will vary by site, but it could have significant impacts. 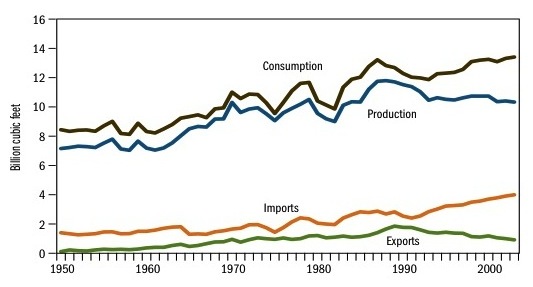 It is clear from the trends that U.S. timber production has leveled off and the United States is importing more wood (primarily from Canada) to satisfy consumption. The figure also illustrates that increasing U.S. forest carbon storage without considering whether a decline in U.S. production may not increase global forest carbon storage.

From a product demand point of view, one of the most significant impacts of climate change policies in Europe, where they are trying to reduce the use of coal for energy, is stronger demand and prices for lower quality woody biomass that can be used as energy wood. The increased prices may allow forest landowners to invest more in the management of their remaining forest stand.

Global demand for wood products has been increasing with growing incomes around the world, especially across Asia, and will put increasing emphasis on ensuring that timber production becomes more productive and sustainable. From a climatic perspective, more displacement of wood products by substitutes such as cement, steel, and coal will lead to substantial increases in overall CO2 emissions.

Recent studies on the impacts of global warming and increased levels of atmospheric CO2 have not shown a drop in tree growth on a global basis, but it appears as if the overall growth of trees has increased even though forests have declined in some regions (Boisvenue and Running 2006). It has been predicted that future timber production will increase in tropical and subtropical regions of the world where rotations (years between harvest) of fast-growing timber species can be 10 to 20 years (Southgate and Sohngen 2007).

Southgate, D. and B. Sohngen. 2007. Weathering Global Warming in Agriculture and Forestry: It can be done with free markets. International Policy Press, London.