Tree physiology functions much as it does in all other plants: Their leaves absorb carbon-dioxide (CO2) from the atmosphere through little pores in their leaves called stomates and use the energy of the sun in a biochemical process called photosynthesis. This process converts carbon dioxide (CO2) and liquid water (H20) into a variety of complex sugars comprised of the basic molecular blocks of one carbon, two hydrogen, and one oxygen atom (CH20). Oxygen is also produced as a byproduct of photosynthesis and is released in gaseous form back into the surrounding air. A primary use of photosynthesized sugar is consumption by all the living tree cells to stay alive in a process called maintenance respiration. Respiration is the chemical reaction between sugar and oxygen that fuels cell function and cell division and is a basic process used by most living cells (plant and animal). Surplus sugar is converted into starch for storage, which is then used to fuel growth of leaves, roots, branches, and the tree stem. Tree growth occurs when optimal temperatures, water supply, and energy reserves (starch and sugar) allow for cell division and the production of cellulose, hemicellulose, and lignin, which are the major components of woody cell walls, in a process known as growth respiration.

Figure 1. How trees produce and use energy for growth and maintenance. Illustrations courtesy of Peter Kolb, University of Montana. 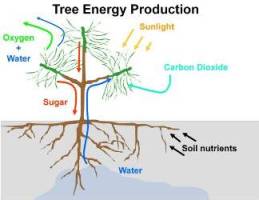 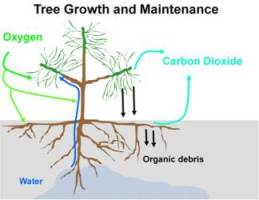 Respiration is a consumptive process, as opposed to photosynthesis, and carbon dioxide is a byproduct that is released into the surrounding air. Maintenance respiration occurs all the time and is a function of temperature – the warmer it is the higher the rate – whereas, growth respiration occurs only when new tree leaves, branches, stem, or root cells are being produced. In most regions, primary tree growth occurs in the spring when temperatures warm up for optimal photosynthesis and when water and nutrients are abundant. Growth slows during the summer and fall when resources become more limited and sugar is directed toward seed/fruit production. When temperatures cool to freezing, growth stops and trees go into dormancy.

In general, the sugar produced by a tree is allocated and used in the following order of importance:

A healthy and vigorous tree consumes about 10 percent of its produced energy for respiration alone.

For more on Tree Biology: