Tree-climate interactions essentially determine where tree species can naturally occur. The genetic processes that direct and create a certain tree species’ morphological and physiological characteristics are closely tied into the local climatic conditions through the process of natural selection. Either a tree has the ability to grow under local temperate and moisture patterns and it survives and reproduces, or it dies off. The ability to reproduce is the key element determining where tree species can naturally survive.

Reproduction starts with the flowering stage where pollen is produced to fertilize the flowers. Both seed and pollen cones are sensitive to frost and excessive heat and dryness, and pollination must be perfectly timed with ideal weather for fertile seeds to be produced. Once viable seeds are produced, they must disperse onto safe sites that are conducive for seed germination and seedling survival. Soil surface conditions that are too hot, cold, dry, or wet can mean that a seed may not receive the right combination of factors to germinate. Even with germination, however, that tiny seedling may not find the right conditions to survive.

For example, in the Northern Rocky Mountains, ponderosa pine trees are considered one of the hardiest species. The relatively large ponderosa pine seed stores enough energy for a newly germinating seedling to develop a tap root that can find adequate deeper soil moisture. A seed is programmed to germinate a certain time after a cold freezing period to ensure it starts to grow in spring when soil moisture is usually sufficient. That seed produces a rootlet that is initially about 3 inches long, enabling it to make reasonable contact with the soil. 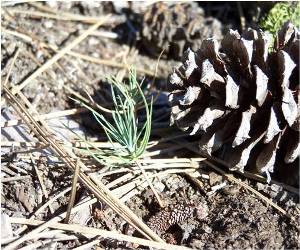 As the needles develop, new energy production allows that root to grow much deeper – up to 1 meter in depth the first year. By finding adequate water, the tiny seedling is able to stay cool during hot summer months when soil surface temperatures exceed 70 degrees C (170 degrees F), which is well above the lethal tissue threshold (Figure 1). If seedlings can’t find adequate water, they die off, which will determine the natural lower elevation zone between forest and dry prairie (Figure 2). Likewise, if a seed lands on a higher elevation site, either it will never warm up enough for it to germinate, or a late frost (as is common with higher elevation) will kill the newly germinated seedling and, thus, determine the upper elevation range of the species.

When climatic patterns change, such as may naturally occur during cool, wet climatic phases associated with the Pacific decadal oscillation in the northwest United States, ponderosa pine seedlings may survive in locations from which they were previously excluded due to drought, and the forest can expand into new areas. Alternately, when a warmer, drier climatic phase dominates, drought can severely limit reproductive success, and extended drought may cause large-scale dieback of mature trees and general shrinking of the forested zone to higher elevations where greater water availability for tree survival exists. Mature trees tend to be more resilient to short-term climatic fluctuations such as drought because they have already developed a deeper root system that allows them to tap into stored soil water; however, extended periods of drought can allow depletion of deeper soil water reserves as well. The time period required for mature tree death to occur from drought can vary between one and 10-plus years and will depend on the tree species and soil water-holding capacity for a particular site. 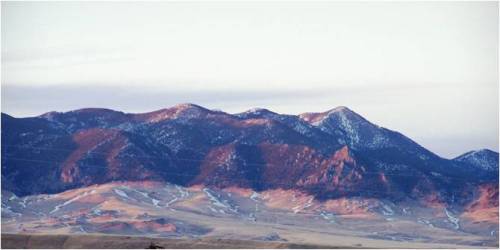 Any forested landscape represents a combination of physical factors and processes, such as topography, geology, and latitude, that interact with the prevailing climate and time to create a specific set of conditions in which specific tree species have the ability to grow (Figure 3). The longer a relatively stable climatic period has occurred, the longer a particular tree species has had to adapt its physiological capacity to better take advantage of the proportions of the resources a specific site has to offer. The more a tree species specializes to grow on a peculiar site, the more fit it is to survive there; however, that adaptation may come at the price of that species losing its ability to grow under a different set of conditions. An event such as 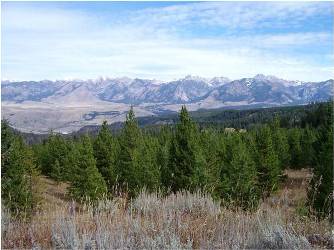 a significant climatic shift may change the temperature and moisture patterns enough that a very specialized species may become extinct. Some tree species have become specialized to grow in certain regions. Whitebark pine, for example, grows on windswept high elevation crags across the Rocky Mountains and is relatively dependant on the Clark’s nutcracker for seed dispersal. Such specialization has allowed it to grow where other trees cannot. However, a change in the specific set of conditions it is adapted to would mean the demise of the species. A gradual climatic warming trend across the northwest United States in the past decades has contributed conditions that have begun to significantly impact whitebark pine. Although this tree species is still being carefully studied, significant mortality from multiple agents has resulted in it becoming more scarce across its former natural range and limited its natural regeneration. Because of these factors, it is currently being considered for endangered species status in the United States. There are concerns that the example of whitebark pine is an indicator of what may happen for many tree species across their natural ranges if the climate changes significantly. 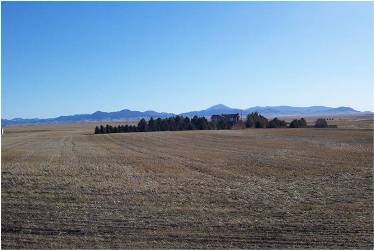 Figure 4. A windbreak of trees established in shortgrass prairie in central Montana. Naturally these trees could never establish themselves, but with certain cultural practices, such as controlling grasses and providing initial watering to planted seedlings, these trees will grow and survive. Photo courtesy of Peter Kolb, Montana State University.

With human help, some tree species can be assisted to grow and be maintained in locations where they do not naturally occur. A prime example is in windbreak and shelterbelt settings. Planting tree seedlings and giving them supplemental water will allow them to grow and survive where they could not naturally establish themselves. If climate change is a rapid phenomenon, human assistance may be needed to maintain tree species in their natural settings by manipulating tree densities or helping them reproduce through planting practices and to migrate to new locations that may be more suitable. Trees on sites that have become too harsh may lack the ability to naturally reproduce (Figure 4). This can be evidenced by planted shelterbelts established on harsh sites of the northern prairies of central Montana and the Dakotas that almost never naturally produce seedlings, (and without human replanting would eventually die off).

Alternatively, other tree species have wide ranges of physiological adaptability – often referred to as phenotypic plasticity, which means they have a wide range of shapes and growth forms they can grow into depending on the local environment. These “generalists” are often pioneer species that colonize sites following disturbances and, thus, have retained a relatively broad genetic pool. Under environmental conditions considered good for growth, they may develop into large robust trees, whereas, on other sites where growing conditions are marginal they may develop into very short trees and even take on a shrublike appearance (Figure 5). Such tree species that have the capacity to adapt their growth to a wider range of environments may become more prevalent across landscapes experiencing rapid climate change.

Figure 5. Left, ponderosa pine on a site with adequate water and a more ideal moderate climate grows to its full height and size potential of 30 meters tall and more than 1 meter in diameter. Right, the same species on a severely water-limited and alternating hot-cold site develops into a short and stunted “shrubby” tree. This shows a remarkable ability to adapt and grow across a variety of climatic conditions and a high initial probability to survive climatic changes. Photos courtesy of Peter Kolb, Montana State University.

For more on Tree-Climate Interactions: