Tree genetics is the study of tree genes – the units of transmission of hereditary characteristics within trees. Each gene is usually a segment of a DNA or RNA molecule within a chromosome that controls the production 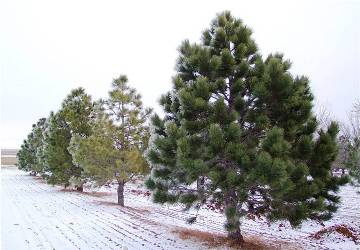 Figure 1. Visible genetic variations in planted ponderosa pines from different geographic locations. The dark green tree in the foreground comes from a location with a similar climate, whereas thinner, paler trees come from higher elevations and wetter sites.

of specific amino acids or proteins that, in turn, influence specific characteristics of development in a tree, such as leaf shape and function. Such characteristics are passed on from parent to offspring and, thus, are the fundamental controllers of what determines one species from another, as well as subspecies, or ecotypes.

Species are usually differentiated from one another because they have uniquely different genes and, therefore, identifiably unique shapes, sizes, functions, and, most importantly, reproductive characteristics. One definition of a unique species is that it cannot mate with another species and produce viable offspring. In trees, this may be because two different trees produce flowers and pollen at different times, pollen may be different shapes and sizes and not capable of entering and fertilizing other species’ flowers, or flowers may have characteristics that do not allow pollen of other species to fertilize them.

In some cases, two closely related but different species may produce a viable offspring that has the characteristics of both species. This is called a hybrid and is often sterile, or unable to reproduce itself. In animals, a common example is the offspring between a horse and donkey, which produces a mule. In trees, the most common example are crosses between species in the poplar family – called hybrid poplars. As mentioned, hybrids are often unable to reproduce offspring of their own, and most hybrids do not develop into adults that have good survival characteristics. Occasionally, a hybrid may have specific traits that are highly desired, such as larger fruit, faster height growth, different colored leaves, which is why they may be artificially produced by humans for specific purposes.

In nature, the genetic variation that occurs and leads to different species is determined by five major processes:

Mutation
The process where a mistake occurs when genes are duplicated or transferred to offspring. The vast majority of mutations are harmful and lead to the individual’s death, but occasionally a mutation results in a beneficial characteristic, such as greater sun or drought tolerance, elongated root growth, different leaf shape or color, and earlier flowering. If these characteristics give an individual a survival advantage, this mutation has a high probability of perpetuating itself within that individual’s offspring.
Natural selection
If the specific genes (such as those from mutations) of an individual organisms give it a survival advantage it has a greater likelihood of producing more offspring that will, in turn, have a higher survival advantage. This leads to the eventual dominance of this genetic trait in a local population. For example, trees in arid climates tend to have small, thick leaves to help them conserve water versus trees in wetter areas, where trees with large, thin leaves do not have a competitive disadvantage. Natural selection, therefore, allows for the development of populations within a species that may be more closely adapted to local characteristics, such as timing of winter and spring, frequent wildfires, water and nutrient availability, and pest and pathogen resistance. Such geographic variations in a species are called ecotypes, or subspecies. If they become isolated enough from the general population, they may develop characteristics that become unique enough to qualify them as a different species.
Migration
This is the general movement of genetic information across a larger population through the dispersal of pollen or seeds. Usually this movement does not occur over large distances and, thus, a large natural landscape covered by trees of the same species will consist of groups of interrelated trees called families and neighborhoods – each with specific and uniquely similar genetic traits, though not different enough to be considered ecotypes, or subspecies.
Genetic drift
Within a population, random differences or variations in genetic makeup can occur when a mutation interacts with natural selection to create a unique trait in a species. This often occurs in small, isolated populations in which there is little migration of outside pollen or seeds. The differences between Black Hills ponderosa pine (two needles per fascicle) and northern Rocky Mountain ponderosa pine (three needles per fascicle) are due to genetic drift as their populations are isolated from each other by hundreds of miles of dry prairie.
Hybridization
Breeding between two different species – often closely related – that result in an offspring is called hybridization. Most hybrids, much like mutations, do not produce viable or fit offspring and, thus, do not flourish. Occasionally, a hybrid will have superior competitive characteristics that allow it a reproductive advantage. Such hybrids eventually may become a subspecies or its own species.

Tree genetics and the processes that control them are the reasons we have many different species of trees and are vital in creating the biodiversity across the earth. Genetic adaptation allows species to colonize lands that may not have supported life and for adapting to more efficiently utilizing the resources available in any particular landscape.

Humans have used genetic breeding and, more recently, gene splicing (the artificial splicing of certain genes from one species into another species’ DNA) to create plants and animals that: produce greater quantities of food, such as many vegetable and cereal crops; specific breeds of horses, such as Belgiums for pulling or Thoroughbreds for racing; and breeds of trees that grow straighter and taller for wood production, such as loblolly pine, or that are more resistant to exotic introduced diseases, such as white pines resistant to European blister rust. Climate change may create conditions where trees that have specific genetic adaptations to the timing of frost and spring, moisture availability, and pest and pathogens, etc., are no longer well adapted to the new climate. Although genetic processes may allow for each species to adapt, this process may take multiple centuries because trees are slow to mature and produce offspring. The more rapid any climatic change that may occur, the greater the chances that a species or ecotype may go extinct. Human assistance in helping species migrate and adapt may moderate negative impacts if rapid climate change does occur.

For more on Tree Genetics: