Tree growth is determined by a tree species’ ability to obtain sunlight, water, nutrients, and air in a specific climate. Each tree species has evolved over time to have a particular growth and reproductive advantage for a specific range of variability of climatic and soil conditions. Tropical trees, for example, do not expend energy for becoming cold hardy and thus outcompete any tree that puts aside energy for that purpose. Alternatively, a tropical tree planted in a climate where freezing occurs will grow tall at a phenomenal rate during the summer, only to die from the first frost while the slower growing trees that allocated energy for winter hardiness will survive. Similar adaptations occur for climates with low versus high humidity, summer rain versus summer drought, and a range of soil conditions and nutrient availability. 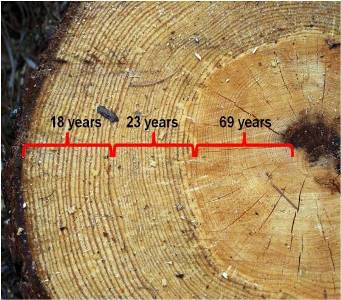 Figure 1. Annual growth rings of a 110-year-old-tree. Light rings are spring/early summer growth and dark rings are late-summer growth. During the first 69 years, this tree was growing in very crowded conditions and was lacking adequate water and light to grow well – hence, its narrow growth rings. Right at 69 years, tree density was thinned by cutting smaller, adjacent trees to give this tree more light and water, and growth started to improve until surrounding trees grew tall and wide enough to once again limit light and water. At 92 years old, the group of trees this tree was growing in was once again thinned, resulting in much wider spacing for residual trees. With adequate water and light, this tree then started growing closer to its optimum ability. Photo courtesy of Peter Kolb, Montana State University.

Where the climate has distinct seasons, tree stem and branch growth can be seen as rings in the woody (xylem) tissue on a cross-section of a tree stem (Figure 1). Light rings are formed in spring when a tree has abundant water, starch is metabolized into sugar, and cell growth is rapid. This produces larger diameter vascular cells for better water transport. As water becomes more limited during the summer, cell growth slows and denser dark rings are produced. A tree’s age can be determined by counting either light or dark rings. Ring width is a reflection of resource availability – wide rings show periods of abundance of resources and, thus, better growth; narrow rings show periods of resource limitation and, thus, poorer growth. Trees growing in more tropical climates may produce rings that correspond to rainy and dry periods, or they may not produce rings if the differences between seasons are not very pronounced.

Tree height growth occurs when the meristematic tissue in terminal buds at the ends of branches starts to grow and divide. This can be seen in spring as elongating buds – often called “candle” growth on conifers (Figure 2) because the elongating buds have not yet developed needles and resemble actual wax candles. All trees grow taller only from the tips of branches. Conifers typically grow taller from one main terminal, creating a single-stemmed tree, versus most broadleaf and deciduous trees that grow taller from multiple terminal branches, creating a multistemmed tree (Figure 3). Once the woody xylem tissue of the stem and branches is formed, it can no longer elongate, so the basic shape of a tree is fixed by the growth that occurs from the branch tips. 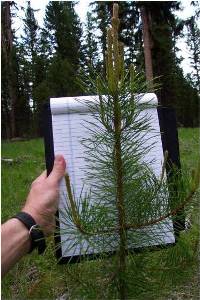 Figure 2. A ponderosa pine sapling showing elongating terminal buds in late spring. In a couple of weeks, these buds will start growing needles and a new height segment will be produced. Last year’s growth is reflected by the stem section starting at the base of the elongated buds and downward to the larger whorl of branches, which shows that approximately 1 foot of growth occurred the previous year. Photo courtesy of Peter Kolb, University of Montana.

Tree growth is determined by the ratio of sugar production in leaves during warm sunlight, daylight hours to continuous sugar consumption by the branches, stem, and roots to stay alive and grow. During the daylight hours of the growing season, the amount of atmospheric carbon dioxide absorbed and converted into sugar (and oxygen released) by a tree is much greater than the amount of sugar consumed by respiration (and carbon dioxide released back into the air). However, during the night when photosynthesis stops due to lack of light, a tree’s respiration rate exceeds photosynthesis, more energy is consumed than produced, and a tree is a net carbon dioxide producer. A tree that is considered healthy and vigorous will produce eight to 10 times more sugar than it consumes and will show wide growth rings, often averaging two to five growth rings per radial inch. Prolonged periods of drought or heat stress can cause a tree to close leaf stomates during the day to conserve water, which results in stopping or slowing of photosynthesis, though respiration must continue to keep tree cells alive. Under these conditions a tree may produce only enough energy to keep its cells alive and measurable growth can almost stop. As a result, 20 to more than 200 rings per radial inch of stem cross-section are not uncommon. Trees that are crowded and compete with each other for light, water, and nutrients can create the same conditions as drought. Such prolonged stress can result in a tree depleting its energy reserves, poor subsequent growth, predisposition to pests and pathogens, and eventual tree death.

Figure 3. The diagram on the left shows how coniferous evergreens grow – usually producing one main stem and each year’s growth terminating with a new whorl (several lateral branches emanating from the same section of main stem). Broadleaf deciduous trees (right) often grow taller with multiple main stems, each of which will add a section of height growth each year while adding random lateral branches. Whereas the age of a conifer can be estimated by counting lateral branch whorls, the age of a deciduous broadleaf is very hard to estimate using the same technique. Illustrations courtesy of Peter Kolb, University of Montana. 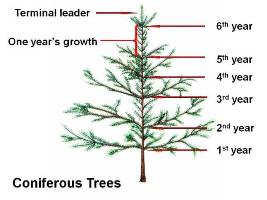 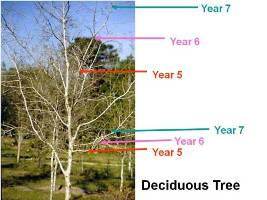 Tree height growth is determined by its energy surplus as well as its genetic programming. A taller tree may be growing on better soil conditions than its neighbor, or it may have the genetic commands to commit more energy to height growth. Such a tree may have a competitive advantage over its shorter neighbor in obtaining more sunlight for photosynthesis. Alternatively, growing taller may occur at the expense of using that same energy for defense compounds or root growth, and that tree may be more suceptible to attack from pests and pathogens or suffer from drought stress. Some species that grow tall in their optimal environment may develop into short prostrate “shrubs” when growing in suboptimal environments. Often trees that grow tall in lower latitudes or valley bottoms grow as dwarfs in polar regions or mountaintops. Trees that have been cultured into “bonsai” trees can be tall-growing trees that have been pruned and purposefully stressed so they grow stunted. It is a very difficult art to stress a tree so it stays small without killing it, which can make true bonsai trees valuable.

For more on Tree Growth: