Urban forests can help keep cities within a healthy temperature range, although the exact temperature reduction from urban forests is difficult to measure. The extent of the effect varies in space and in time, which complicates the issue, but large parks or tracts of urban trees can cool daytime summer air temperatures by about 10°F (McPherson and Simpson 1995).

Increasing the green cover of cities by 10% or more could help temper the local temperature rise projected for coming decades as climate change manifests (Gill et al. 2007). Plants cool the surface of the planet in two ways. They cool the air by evaporating water through their leaves. They also moderate the temperature of the ground surface by shading it from direct sunlight. Both of these processes have the greatest impact on sunny summer afternoons.

Trees transpire water through their leaves, increasing the surface area contributing to evaporation. When a molecule of water evaporates, it takes with it some heat that could otherwise be used to warm the nearby environment. Trees provide an evaporative cooling effect that can decrease local air temperatures by several degrees Fahrenheit. This effect typically reaches its peak when evaporation levels are highest, usually at midday.

Even more dramatically, the temperature difference between shaded and non-shaded ground can be as much as 36°F, based on some studies described below. While the studies measured temperature of the ground surface, heating differences also occur at the surface of an animal’s fur or a person’s skin.

It is difficult to estimate the influence of urban trees at the scale of a city, perhaps in part because the differences tend to register at the local scale of neighborhoods (Harlan et al. 2006). The climatic effect of vegetation also varies throughout the day, with the cooling effect typically peaking at midday.

In a study in Valencia, Spain, researchers found that a temperature monitor exposed to direct sunlight warmed to about 104°F in midday sun, while a shaded monitor at the same site registered below 80°F (Gomez et al. 2004). In a study in Phoenix, Arizona, the surface temperature of asphalt measured 140°F on a hot summer day, while a nearby patch of shaded grass measured 104°F (Mueller and Day 2005). In both cases, the biggest differences occurred on the hottest afternoons. 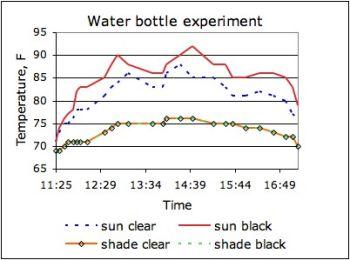 Four half-pint water bottles were set on a table: two clear and two painted black. One of each color was set in the shade and the other in the sun. The temperatures were measured from 11:25 am to 5:15 pm. Source: Diana Rashash, NC Cooperative Extension.

Peak temperatures of soil exposed to direct sunlight reached about 18°F warmer than soils under shade on a typical July afternoon, based on a year-long study of temperatures below piñon-juniper canopy in New Mexico (Breshears et al. 1998). Temperature monitors were placed roughly 1 inch (2 cm) below the surface to measure near-ground fluctuations. While daytime summer soil temperatures ran lower under the tree canopy, January soil temperature consistently ran slightly higher under the sheltering canopy than it did in the exposed areas. The difference of several degrees Fahrenheit was most pronounced at night during the cool season, with little or no extra heat detected during the warmer nights in May and July.

These studies and others indicate that trees moderate heating at the ground surface, providing a cooling effect that is most pronounced on summer days, while a slight warming effect occurs during winter nights. The effect this will have on heating and cooling costs in urban areas relates largely to location and size of trees.

A Tucson study assessing cooling value found little temperature difference when relatively small trees were planted randomly around homes, with canopy comprising about 30% of the area (Kliman and Comrie 2004). In contrast, a Phoenix study that projected daily energy savings of about 13% or more assumed large trees comprised about 60% of the area with most plantings on the west and south of the residence (McPherson and Simpson 1995). The Tucson study found plantings on the west and south sides of homes tended to provide the most cooling in summer, while plantings on the north side actually increased the heat load, perhaps by blocking winds.

The consistent finding that the cooling effect from shade and transpiration is most pronounced on summer afternoons indicates that trees near buildings could help reduce energy demands, especially during times of peak demand (McPherson and Simpson 2003). This can be especially important during hot months or during heat waves, as these are the times when electrical power production is most susceptible to large-scale blackouts.

Related to Trees and Local Temperature: