What Do People Call the Warming of the Earth’s Atmosphere?

Do People Believe the Climate Is Changing?

Surveys of adults in the United States reveal differing beliefs about whether or the extent to which the climate is changing. The Six Americas studies (Maibach et al. 2009, Leiserowitz et al. 2010b) report on six categories of the American public that vary on how strongly they believe the Earth’s temperature is warming and what they are willing to do about it:

Do People View Climate Change as a Problem?

In a national study, the majority of respondents (68%) indicated concern about impacts of climate change on people worldwide and on non-human nature (Leiserowitz 2006). However, when respondents in another survey were asked to prioritize domestic issues, climate change fell at the bottom of a list of 20 issues (Nisbet 2009). In Florida, 65% of respondents believe dangerous impacts will occur in their state in next 25 years, yet respondents are more likely to believe that global warming will affect plants, animals, and people in other countries more than themselves (Leiserowitz and Broad 2008). Even those who believe the climate is changing do not know whether the changes will affect them or do not believe the changes will affect them. Furthermore, they consider other issues more important right now.

What Knowledge Do People Have about Climate Change?

Studies reveal that the public is still confused about global warming and its causes (Bostrom et al. 1994). In the Six Americas studies, less than half of respondents (45%) understood that the greenhouse gas carbon dioxide traps heat from the Earth’s surface and only 25% had heard of coral bleaching or ocean acidification. Respondents recognize the limitations of their knowledge: 75% would like to know more, and 75% want schools to teach children about causes of, consequences of, and potential solutions to climate change (Leiserowitz et al. 2010a). Many people have limited and inaccurate understandings of climate change, but they are willing to learn more.

Do People Support Taking Action in Response to Climate Change? 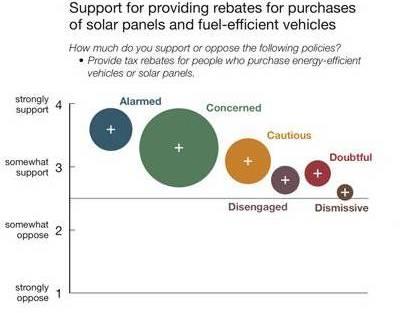 While 76% of survey respondents favor government limitations on greenhouse gas emissions by businesses, even more favor encouraging a switch to more efficient cars (81%), appliances (80%), and homes (80%) (Krosnick 2010). Respondents in all categories of the Six Americas studies favor funding research for renewable energy and providing tax rebates for solar panel purchases and state that they are willing to make energy efficiency improvements at home (Leiserowitz et al. 2010b). There is public support for actions that conserve energy and invest in renewable energy.

The following factors make it challenging for people to understand and agree on the implications of climate change:

What Does the Research Mean?

People have different psychological, cultural, and political reasons for their beliefs and actions regarding climate change. Methods for getting people to act in response to climate change can be based on the research findings described in this article.

Those who would like to encourage people to adopt new behaviors or to support policy changes should try to frame the issue of climate change with strategies that are already positively received. The concepts of energy conservation, reduced reliance on fossil fuels, and support for renewable energy sources are compatible with climate change mitigation activities.

Even among those who believe the climate is changing, many think impacts will be felt by others rather than themselves. Discussions of climate change should include descriptions of vicarious experience or opportunities for direct experience to convey risk more accurately and to generate appropriate levels of concern (Weber 2006, Leiserowitz et al. 2010b).

Empowering people to change their behaviors may be more likely through citizen science and social learning through participatory groups.

Wojcik, D.J., M.C. Monroe, D.C. Adams, and R.C. Plate, 2014. Message in a bottleneck? Attitudes and perceptions of climate change in the Cooperative Extension Service in the Southeastern United States. Journal of Human Science and Extension 2(1): 51-70.

Schwartz, M., 2010. Majority of Americans continue to believe that global warming is real. Summary of research reports by Jon Krosnick, and available at: http://climatepublicopinion.stanford.edu/sample-page/research/majority-o….