Water balance is a method of book keeping used to summarize the amount of water cycling from the atmosphere, across land surfaces, into the ground, through plants, into the ocean, and back the atmosphere. It provides a good framework for understanding hydrologic processes. Water balances can vary year to year in a given location, but a water balance can provide a picture of how water is moving across the earth’s surface, where transmission losses occur, and how much is evaporating back to the atmosphere.

Determining a water balance requires looking at the following components:

Typically, quantities for ground water recharge and evaporation and transpiration of channel losses are not determined because they can be difficult to calculate and are often site specific.

Transmission losses, called abstractions, refer to the water that infiltrates into channel beds and banks during stream flow. As flow travels through a normally dry channel, water that infiltrates into the channel reduces the runoff volume and the peak rate of flow downstream. Water lost to this infiltration can contribute to groundwater recharge, and at a minimum will affect soil moisture distribution in the surface sediment layers. Groundwater recharge can be seen as increases in water levels in wells in and adjacent to channels following flood events. Runoff losses to this type of infiltration can be large.

Ephemeral channel transmission losses play an important role in groundwater/surface water dynamics, especially in the southwestern United States. However, identifying the processes driving these dynamics is difficult. Quantifying recharge with greater certainty is a critical need for managing basins whose primary source of water supply is derived from groundwater.

The geology along and beneath the stream channel creates some reaches that are underlain by impervious material, whereas in other locations, a channel may extend to regional groundwater reservoirs, allowing for considerable recharge. In areas where a channel may be underlain by an impermeable material, riparian aquifers connected to the channel can become saturated, supporting several organisms such as phreatophytes. 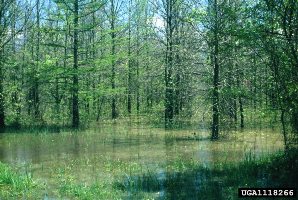 Figure 1. Flooding occurs when large amounts of precipitation and runoff exceed the amount that can infiltrate a land surface in a given amount of time. Photo by Brian Lockhard, USDA Forest Service courtesy of forestryimages.org.

Although the destructive effects of floods in eroding and reshaping channels receives much attention, floods provide critical out-of-bank deposits in riparian areas that replenish nutrient supplies. Floods occur on both local and regional scales. Local floods occur with greater frequency, largely in response to large sudden amounts of precipitation. Flood occur due to the cumulative effects of precipitation and runoff across many small watersheds. Precipitation lasting for several days and covering large areas causes runoff over large areas that accumulates as flow travels through the channel network.

Although floods are more dramatic in their suddenness and destruction, the persistence of droughts can cause more severe consequences. Droughts may initially be associated with a lack of precipitation, but long-term consequences such as soil moisture deficit, reduced surface water flow, and a drop in groundwater level have severe impacts on ecosystems and water supply.

In some areas of the United States, the incidence of floods and drought are predicted to increase due to changes in climate. Monitoring and accounting for water use and loss within an area can help managers and land owners determine if there have been significant changes in the hydrologic cycle in their region.