A tree is a plant with a tall structure comprised of a stem and branches to support leaves and a root system than anchors the stem as well as procures and stores essential growth elements, such as water and nutrients. Trees are unique from other plants because they can and usually do live for decades and even up to several millennia (the oldest known single-stem tree is a baobab in South Africa measured to be 6,000 years old). They are also unique because they grow successive layers of woody vascular tissue that is added from growth just under the bark to develop woody stems, and in most parts of the world they grow taller than surface vegetation, ranging in height from several meters up to 115.55 meters (the tallest recorded tree is a giant redwood in northern California).

A tree stem is unique from other plant forms in that its woody stem growth occurs from a thin strip of cells called the cambium located just under the outer bark. Each year the cambium produces layers of new growth to the outside and inside. Growth to the outside is called the phloem and consists of large-diameter cells designed to conduct sugar water from the leaves down the stem to the rest of the tree. Because of their large diameter, phloem cells are structurally weak and collapse after a year or two and are pushed outwards in compacted layers to become the outer bark.

Growth to the inside is called the sapwood and functions as a living water transport system from the roots to the leaves and a storage site for surplus sugar and starch. As sapwood ages, it becomes a depository for secondary metabolite materials such as phenols and terpenes. Eventually, older sapwood dies and becomes the dead central core of tree called the heartwood. Deposited materials also make the heartwood of many tree species toxic to fungi and microorganisms, which is why lumber cut from tree heartwood is often more durable than the nutrient-rich sapwood. All trees have these key characteristics, although their stem shapes, wood composition, leaf shape, and overall form can vary significantly.

Figure 1. Diagrams illustrating the parts of a tree. Illustrations courtesy of Peter Kolb, University of Montana. 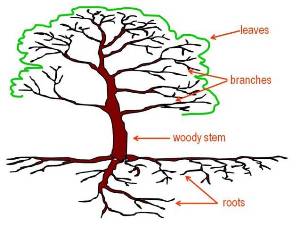 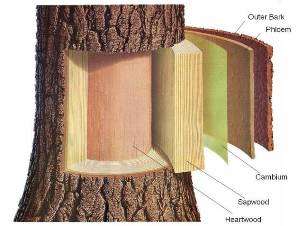 For more on What Makes a Tree Unique?:

For More in Forest Ecosystems: