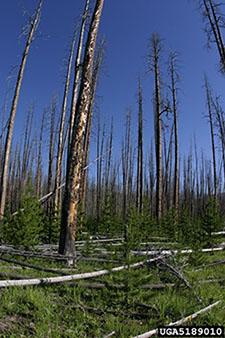 Forests are dynamic, changing ecosystems. Trees grow, eventually die, and are replaced by new trees, often of different species. This natural pattern of succession is punctuated by disturbances, which change the environmental condition of the forest. Disturbances include fires, insect outbreaks, ice and windstorms, and droughts and floods, and they may be small or large in scale.

Disturbances are part of nature’s processes and are important in the life cycle of a forest. A fire, for example, creates openings in the forest canopy, allowing new seedlings to regenerate. Some tree species, such as aspen and lodgepole pine, even need fire to regenerate.

However, disturbances also create stress within an ecosystem. A healthy forest is resilient to these stresses, meaning that over time, the forest can return to its previous state of equilibrium following the disturbance. Continuing with the wildfire example, a resilient forest could sustain a heavy burn and regenerate back to forest. A forest that has lost its resiliency might, after burning, regenerate to grass or shrub cover instead of trees. This state change might happen if a warmer and/or drier climate reduces the survival of tree seedlings.

Climate change is expected to amplify many of the existing stressors on forests. Consequently, landowners concerned about the effects of climate change should consider implementing climate change resilience strategies.

Many forest management steps improve forest resiliency regardless of the extent of climate change. For example, wildfires, which play a significant role in western forests, have increased in number and are projected to increase further under a changing climate. In light of increased stress from climate change, managing a forest such that resiliency is maintained becomes even more important. At the same time, dense conditions in many forests, especially in the West, benefit from thinning under any climate regime.

No single management prescription for a resilient forest exists. Achieving effective management depends on the ecosystem, the current and future expected climate, and the stressors that influence the ecosystem. However, several broad principles contribute to resiliency. These include controlling forest density to ensure adequate resources for growth and tree vigor, promoting species diversity, maintaining populations of natural predators, and otherwise creating stand conditions that lessen the impact of stressors. These strategies are discussed in more detail on other pages of this website.