Birds face many challenges from climate change, with declines in diversity near the top of the list. The potential for local or continental extinctions increases with the extent of warming (Thomas et al. 2004). The measure of diversity, known as species richness, is particularly susceptible to local declines as climate changes because bird species richness tends to be lower in hot areas than cool areas (Currie 2001). In some studies of individual bird species in Europe, species are already showing evidence of shifts in populations and, in some cases, declines (Both et al. 2006, Lemoine et al. 2007).

Birds, like all organisms, depend on their habitats for food, water, shelter, and opportunities to breed and raise young. Climate change may alter animal behavior, population size, species distributions, plant and animal communities, and ecosystem function and stability. Different species will be affected to different degrees, depending on their ecology and life history. Similarly, different habitats and ecosystems will be impacted differently, with those in coastal, high-latitude, and high-altitude regions most vulnerable. Most at risk will be bird species with small population sizes, restricted ranges, specialized habitat requirements, and limited ability to move to different habitat.

During the last two million years, the Earth has gone through several extended periods of cooling and warming, which have resulted in dramatic changes in vegetation and species composition (Graham and Grimm 1990, MacDonald et al. 2008). Projections for global climate change include extensive warming, changing patterns of precipitation, changing season lengths, declining snowpack, and increasing frequency of severe weather events. Many of these are already being observed. 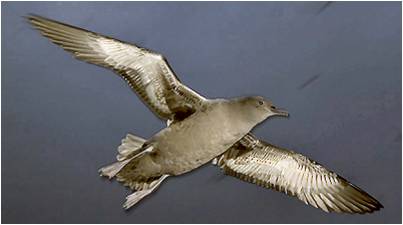 Figure 1. The number of sooty shearwaters (Puffinus griseus) has dropped dramatically off the coast of California. One study has linked their decline to the warming of the California Current. Source: Thomas Mattern, Department of Zoology, University of Otago, Dunedin, New Zealand.

How might these changes affect birds? Using the National Audubon Society’s Christmas Bird Count data, Price and Root (2005) have shown that, in North America, the northern limits of many bird species are strongly associated with temperature. Further analyses revealed that both the ranges and the abundances of birds shift, on an annual basis, in concert with temperature. For example, one study found that 20 species of migrating birds were arriving about three weeks earlier in 1994 than they had in 1965 (Price and Root 2005). A 90-percent decline in sooty shearwaters (Puffinus griseus, Fig. 1) off the California coast in just seven years (1987-1994) has been associated with warming of the California Current, which flows from southern British Columbia to Baja California (Veit et al. 1997). These studies reveal that several bird species can, and do, respond to changing climatic conditions.

Temperature is not the only influence on bird distribution, however. Because their ranges are limited by vegetation, some birds probably will not be able to shift their ranges with the changing climate until the vegetation itself shifts (Davis and Zabinski 1992). Physiology will affect the distance birds can travel, while climate change will affect the distribution of prey, predators, and competitors. Consequently, natural communities of birds may change dramatically in the future as changes in climate and vegetation favor some species and harm others. It is difficult to predict how these changes will influence community structure or function, in part because it is difficult to model species interactions and whether suitable habitat might still be found in habitat refugia. For instance, areas along rivers might have a microclimate that differs from the regional climate, but these sites will fall below detection in standard global climate models (Price and Root 2005).

Long-distance migrants may be more vulnerable to global warming than other species. As winter temperatures increased between 1980 and 1992 at Lake Constance in central Europe, the proportion of long-distance migrant bird species decreased, and the number and proportion of residents and short-distance migrants increased (Lemoine and Bohning-Gaese 2003). In North America, many songbirds are long-distance migrants. Species such as Baltimore oriole (Icterus galbula), barn swallow (Hirundo rustica), wood thrush (Hylocichla mustelina), and scarlet tanager (Piranga olivacea) could well be driven from the places where we expect to find them and, more ominously, from the habitats to which they are best suited. 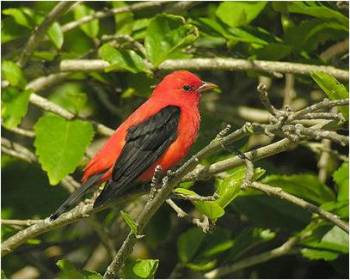 Although interactions among other species and vegetation will be important factors in how individual bird species fare as climate changes, understanding more about the climatic conditions in which particular species thrive can serve as a starting point for consideration. Matthews and others (2004) modeled the distribution of 150 species common to the eastern United States in relation to climate and elevation variables and describe the model for each species. These models can be paired with results from global climate models to answer research questions.