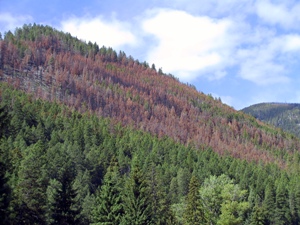 Disturbance regimes for fires, insect and disease outbreaks, and invasive species are altered by changes in climate.

Figure 1. Changes in climate are forecast to increase the intensity and severity of several forms of disturbance, such as wildfire, which could impact the health and sustainability of many ecosystems. Photo: Chris Schnepf, University of Idaho.

Climate is critical as to whether a species population will expand or contract within its range. Most forests and other vegetative types naturally grow in the climate to which they are best adapted. Some forest tree species have greater adaptability to variable climatic conditions than others by virtue of genetic adaptation across their expansive ranges, although a species’ current range may not always reflect its adaptability. For example: Aspen, ponderosa pine, and burr oak are species that have expansive ranges covering hundreds of thousands of square miles; redwoods are limited to the cool rainy coastal regions of the Pacific Northwest; and Monterey pine has a small native range where it is tightly hemmed in to a mere 22 square miles (Burns & Honkala 1990). Aspen and ponderosa are obviously adapted to a wider range of conditions than are redwoods. Strangely, however, Monterey pine is also well adapted to a wider range of conditions, especially other regions of the world. It is worldwide the most extensively grown pine in plantations (Burns & Honkala 1990), and in Chile and New Zealand, it is grown on more than 9,300 square miles (Turland & Neumaun 1992, USDA Forest Service 1993).

Historically, Monterey pine had a much greater range, extending as far south in California as San Clemente and northward to Point Reyes. The range of the tree was likely influenced by disturbances related to climate change over the past 2 to 3 million years (Millar 2000). Dale et al. (2001) concluded from Baker (1995) and Turner’s (1998) work that “[l]ocal, regional, and global changes in temperature and precipitation can influence the occurrence, timing, frequency, duration, extent, and intensity of disturbances.” These disturbance events can greatly influence the distribution of plant species.

Taking into account Dale et al. (2001), the ability of Monterey pine to adapt in Chile and New Zealand may simply be an artifact that Chile and New Zealand have growing conditions very similar to the tree’s native range. A similar argument could be made for ponderosa pine, aspen, and bur oak; perhaps there is just more land base in North America that has the right growing conditions for these species than for coastal redwoods or Monterey pine.

Another factor to consider with plants that have wide geographic distribution is that they also have a wide variability in their genetic makeup from one end of their distribution to another. Ponderosa pine from southern Arizona will probably struggle to survive in northern Montana. However, if the climate continues to warm, those wanting to grow ponderosa pine in Montana may look to southern regions for seed to grow trees that are better adapted to warmer temperatures.

In North America, one of the biggest forest disturbance events in the past 20 years has been the lodgepole pine–mountain pine beetle outbreak in British Columbia. Workers have pointed to warmer winter temperatures as an instigating factor in the success of the beetle. There are many questions still to be answered as to what the structure of those forests will be in the future. Will lodgepole pine make its way back, or will another species begin to dominate those sites?

The future structure of forests that have major weather-related disturbance events will likely depend on what the future climate will be. If the recent disturbance events of the past 20 years subside and weather across the globe “normalizes,” then stand structure may well be familiar. Whereas, if extreme weather events continue into the foreseeable future, then the truly adaptable species may win out, becoming the dominant tree types.

For more on Climate and Disturbance:
How a Changing Climate Can Affect Tree Health
Climatic Thresholds and Environmental Change

Millar, C. 1999. Evolution and biogeography of Pinus radiata, with a proposed revision of its quaternary history. New Zealand Journal of Forestry Science 29(3):335-365.

In Climate and Disturbance: