The mountain pine beetle (Dendroctonus ponderosae) (Fig. 1) is an indigenous North American bark beetle that has been confined to the western part of the continent by the Rocky Mountains and the Great Plains geographical barriers. Exactly one generation per year is ideal for this diapause-free, or dormancy-free, species. 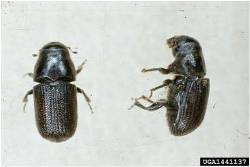 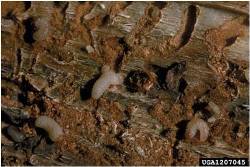 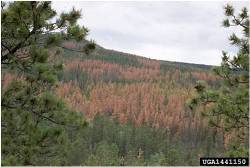 Considerable knowledge of this insect’s physiological responses to temperature is available, both in terms of development (Bentz et al. 1991) and cold tolerance (Régnière and Bentz 2007). Models were used to determine the area in Canada that is climatically most suitable to this insect. Risk maps developed for the country overlay the probabilities that the insect can achieve an adaptive seasonality and that it can survive the extreme cold of the Canadian winters, both under current and future climates. These maps suggest that Canada east of the Rocky Mountains will remain inhospitable to this insect well into the future, except for parts of northwestern Alberta and the Atlantic seaboard. However, the risk of mountain pine beetle outbreaks in the western part of the country is likely to increase dramatically in higher latitudes and altitudes, while decreasing at lower latitudes and altitudes. This information, combined with knowledge of the susceptibility of the various pine (Pinus spp.) species in Canada’s boreal forest, helped Canada devise a risk-based strategy for managing an unprecedented outbreak of mountain pine beetle in British Columbia and Alberta (Nealis and Peter 2008).