Occasionally, people erroneously refer to a shelterwood system or a seed-tree system as an uneven-aged management method. With these systems, however, overstory trees are left on site only long enough to establish new seedlings. Once adequate regeneration is established, the overstory trees are removed, leaving an even-aged forest. 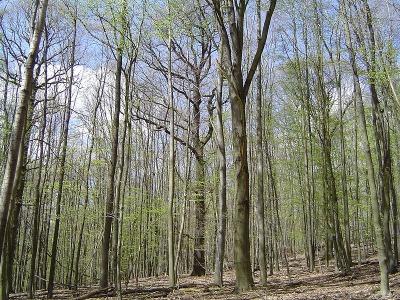 The selection silvicultural system is the most traditional approach to uneven-aged management. With the selection system, the forest owner attempts to maintain a range of desired tree sizes, species, and ages by harvesting individual trees (individual selection) or small groups of trees (group selection). Because individual selection maintains a fairly shady environment, it is best suited to sites that can sustain shade-tolerant trees over the long term or drier sites where shade-tolerant trees will not take over. In group selection, groups are usually less than three acres.

Typically, the use of a selection system involves removing some trees every 10 to 15 years to maintain a regular, periodic flow of wood, regardless of price. Thinnings aren’t generally used in the classic selection system (though some groups might be thinned) because each stand entry thins the stand somewhat. The goal with each entry is to maintain an all-aged stand. New trees usually are regenerated naturally.

It is possible to use a selection system to convert an even-aged stand to an uneven-aged stand. However, making such a shift successfully takes decades of meticulous attention.

Occasionally, you will hear people refer to the act of “logging selectively.” If someone is talking about a method that involves making only one entry and taking all trees over a certain diameter, he or she is not referring to a selection silvicultural system. Rather, the practice being described is diameter-limit cutting (sometimes referred to as high-grading), where all trees above a certain diameter are cut regardless of individual tree vigor, species, distribution, or age. In an even-aged forest, the act of simply cutting trees over a certain size usually leaves the poorest competitors on the site to parent new seedlings. This tactic is like choosing the weakest steer in the herd for a breeding bull or using your smallest potatoes every year for seed potatoes the next—you would be breeding for smaller cattle or smaller spuds. The same is true in diameter-limit cuts—leaving the smallest trees erodes stand genetics. Cutting only the largest trees in an even-aged stand is the opposite of what would happen in unmanaged forests, where the strongest and biggest trees would have an advantage in natural selection.

Partially in response to concerns about the social acceptability and environmental sustainability of widespread clear-cutting, some scientists working in Pacific Northwest coastal forests have experimented with a silvicultural approach that retains more large trees, snags, and downed logs and other biological legacies of old growth forests to enrich the new stand. This approach, referred to as variable retention harvesting (VR), does not fit exactly into uneven-aged management but may be appropriate to mention here.

Two general types of retention—dispersed and aggregated—are discussed, and they frequently are combined in the same harvest unit. Dispersed retention retains trees and other stand structures in a dispersed or uniform pattern. Aggregated retention strategically retains structures as intact forest patches (usually smaller than 2.5 acres in size) within the harvest unit.

Many forest owners who have streams on their properties already practice a degree of aggregated retention because state forest practice laws commonly require leaving forested corridors along streams to sustain riparian function. Aggregated retention has several advantages over dispersed retention, including leaving portions of the forest floor intact, leaving snags in a way that does not threaten logger safety, and allowing more light into the unit for shade-intolerant species.